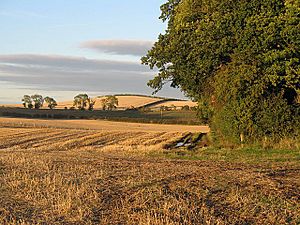 Crop rotation (Fallow land) is the practice of growing two (or more) dissimilar type of crops in the same space in sequence. It is one component of polyculture. Examples of types of crops that can be rotated include cereals and legumes, and deep-rooted and short-rooted plants.

Crop rotation is less common with field crops because the timing is difficult to manage, particularly since most crop-growing regions experience a good deal of rainfall during the late spring and early summer season, which interrupts fieldwork.

Crop rotation avoids a decrease in soil fertility, as growing the same crop repeatedly in the same place eventually depletes the soil of various nutrients.

A crop that leaches the soil of one kind of nutrient is followed during the next growing season by a crop that returns that nutrient to the soil, for example, rice followed by wheat, or rice followed by cotton. If crop rotation is done properly, farmers can keep their fields under continuous production, without a need to let them lie fallow or to apply artificial fertilizers, both of which can be expensive.

Crop rotation is also used to control pests and diseases that can become established in the soil over time. Families of plants tend to have similar pests. By regularly changing the planting location, the pest cycles can be broken or limited.

Crop rotation was already mentioned in the Roman literature, and referred to by great civilizations in Africa and Asia. From the end of the Middle Ages until the 20th century, the three-year rotation was practised by farmers in Europe with a rotation: rye or winter wheat, followed by spring oats or barley, then letting the soil rest (fallow) during the third stage.

All content from Kiddle encyclopedia articles (including the article images and facts) can be freely used under Attribution-ShareAlike license, unless stated otherwise. Cite this article:
Crop rotation Facts for Kids. Kiddle Encyclopedia.