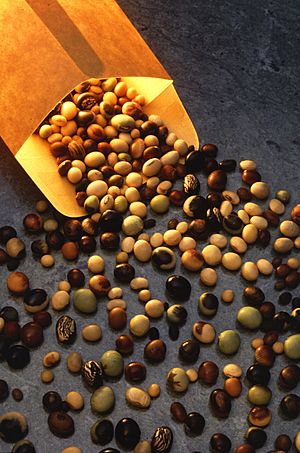 Many varieties of soybean.

A legume is a type of dry fruit usually produced by plants in the family Fabaceae. Legumes can be a variety of fruits: peas and beans are types of legumes.

What legumes have in common

Legumes grow from the carpel, the female reproductive part of a plant. The fruit of a legume is found inside a pod that can be split on both sides. However, there are some foods that grow inside pods that are not legumes. 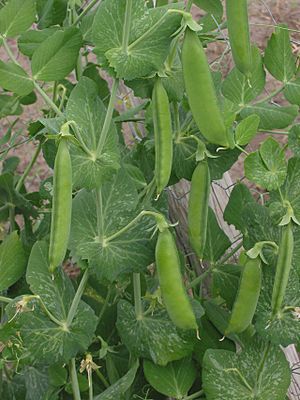 Peas inside their pods. 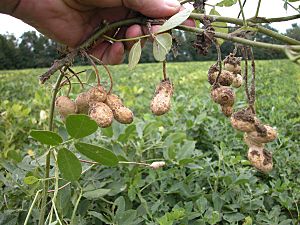 Grain legumes are cultivated for their seeds. The seeds are used for human and animal consumption or for the production of oils for industrial uses. Grain legumes include beans, lentils, lupins, peas, and peanuts.

Legumes are a significant source of protein, dietary fiber, carbohydrates and dietary minerals; for example, a 100 gram serving of cooked chickpeas contains 18 percent of the Daily Value (DV) for protein, 30 percent DV for dietary fiber, 43 percent DV for folate and 52 percent DV for manganese. Like other plant-based foods, pulses contain no cholesterol and little fat or sodium.

Legumes are also an excellent source of resistant starch which is broken down by bacteria in the large intestine to produce short-chain fatty acids (such as butyrate) used by intestinal cells for food energy.

Preliminary studies in humans include the potential for regular consumption of legumes in a vegetarian diet to affect metabolic syndrome. There is evidence that a portion of pulses (roughly one cup daily) in a diet may help lower blood pressure and reduce LDL cholesterol levels, though there is a concern about the quality of the supporting data. 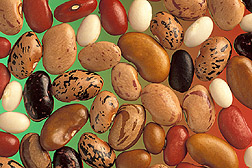 Depending on the variety, Phaseolus vulgaris (a pulse) may be called "common bean", "kidney bean", "haricot bean", "pinto bean", "navy bean", among other names.

India imports (buys from other countries) the most legumes. This may be because a lot of Indians follow the religion of Hinduism, which does not approve of people eating meat. Legumes are a cheap and plentiful source of food in a country where around 22% of the population are in poverty. The top four producers and exporters (selling to other countries) of legumes are:

The USA uses legumes for a variety of reasons, and is the highest producer. It uses soybeans to feed cattle and make vegetable oil. Peanuts are a popular snack food in the USA and these are also a type of legume.

All content from Kiddle encyclopedia articles (including the article images and facts) can be freely used under Attribution-ShareAlike license, unless stated otherwise. Cite this article:
Legume Facts for Kids. Kiddle Encyclopedia.