Poaceae or Gramineae are the "true" grasses. They are a large family of Monocot flowering plants. There are about 10,000 species and 660 genera, and they are one of most ecologically and economically important of all plant families. Rushes, and sedges fall outside this family, but they are related.

Grasslands are about 20% of the vegetation cover of the Earth. Poaceae also live in many other habitats, including wetlands, forests, and tundra.

Domestication of poaceous cereal crops such as maize (corn), wheat, millets, and rice are eaten around the world. The Poaceae are the most economically important plant family in modern times, providing forage, building materials (bamboo, thatch) and fuel (ethanol), as well as food. 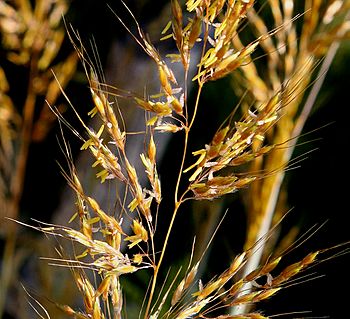 Grass blades grow at the base of the blade and not from elongated stem tips. This low growth point evolved in response to grazing animals and allows grasses to be grazed or mown regularly without severe damage to the plant.

Three general classifications of growth habit present in grasses: bunch-type (also called caespitose), stoloniferous, and rhizomatous. The success of the grasses lies in part in their morphology and growth processes and in part in their physiological diversity. Most of the grasses divide into two physiological groups, using the C3 and C4 photosynthetic pathways for carbon fixation. The C4 grasses have a photosynthetic pathway, linked to specialized Kranz leaf anatomy, which allows for increased water use efficiency, rendering them better adapted to hot, arid environments and those lacking in carbon dioxide.

The grass family is one of the most widely distributed and abundant groups of plants on Earth. Grasses are found on every continent, including Antarctica with the presence of Antarctic hair grass on the Antarctic Peninsula. 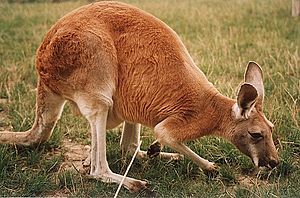 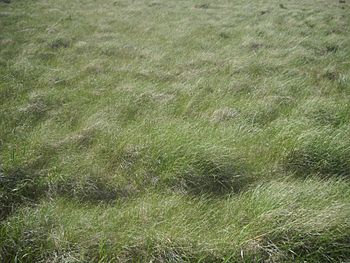 Wind-blown grass in the Valles Caldera in New Mexico

Grasses are the dominant vegetation in many habitats, including grassland, salt-marsh, reedswamp and steppes. They also occur as a smaller part of the vegetation in almost every other terrestrial habitat. Grass-dominated biomes are called grasslands. If only large, contiguous areas of grasslands are counted, these biomes cover 31% of the planet's land. Grasslands include pampas, steppes, and prairies. Grasses provide food to many grazing mammals—such as livestock, deer, and elephants—as well as to many species of butterflies and moths. Many types of animals eat grass as their main source of food, and are called graminivores – these include cattle, sheep, horses, rabbits and many invertebrates, such as grasshoppers and the caterpillars of many brown butterflies. Grasses are also eaten by omnivorous or even occasionally by primarily carnivorous animals.

Grasses are unusual in that the meristem is located near the bottom of the plant; hence, they can quickly recover from cropping at the top. The evolution of large grazing animals in the Cenozoic contributed to the spread of grasses. Without large grazers, fire-cleared areas are quickly colonized by grasses, and with enough rain, tree seedlings. Trees eventually outcompete most grasses. Trampling grazers kill seedling trees but not grasses.

All content from Kiddle encyclopedia articles (including the article images and facts) can be freely used under Attribution-ShareAlike license, unless stated otherwise. Cite this article:
Poaceae Facts for Kids. Kiddle Encyclopedia.