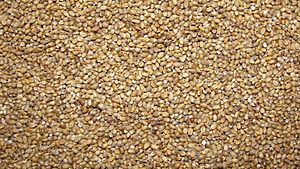 Pearl millet is the most widely grown type of millet. It has been grown since prehistoric times. It was problably domesticated in the Sahel zone of West Africa. Evidence that has been found in what is now northern Mali, suggests that domestication of pearl millet happened there between 2500 and 2000 BC. It was then cultivated more widely. There is evidence that around 2000 BC; there was cultivated pearl millet on the Indian subcontinent. It probably reached the south of India around 1500 BC. Cultivation also spread in Africa. Today, it is widely grown in the northern parts of Nigeria. It is easy to grow, and adapted to harsh weather conditions such as drought, and floods. It was introduced to the United States in the 1850s, and to Brazil in the 1960s.

All content from Kiddle encyclopedia articles (including the article images and facts) can be freely used under Attribution-ShareAlike license, unless stated otherwise. Cite this article:
Pearl millet Facts for Kids. Kiddle Encyclopedia.