Chasmanthium latifolium, known as woodoats, inland sea oats, northern sea oats, and river oats is a grass native to the central and eastern United States, Manitoba, and northeastern Mexico; it grows as far north as Pennsylvania and Michigan, where it is a threatened species. The species was previously classified as Uniola latifolia (André Michaux). 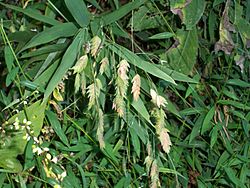 It is used in landscaping in North America, where it is noted as a relatively rare native grass that thrives in partial shade; the plant is recommended for USDA hardiness zones 3–9 in acidic sands, loams, and clays.

It is a larval host plant for the Northern Pearly-Eye, and its seeds are food for birds and mammals. It is also eaten by the caterpillars of the pepper and salt skipper, Bell's roadside skipper, and bronzed roadside skipper butterflies.

All content from Kiddle encyclopedia articles (including the article images and facts) can be freely used under Attribution-ShareAlike license, unless stated otherwise. Cite this article:
Chasmanthium latifolium Facts for Kids. Kiddle Encyclopedia.