Alfalfa (Medicago sativa) is a species of flowering plant in the family Fabaceae. It is also known as the lucerne. It is native to the Near East and central Asia. It has been introduced to Europe, central Africa, China, North America, and South America. Alfalfa is a crop. It is used to feed livestock. 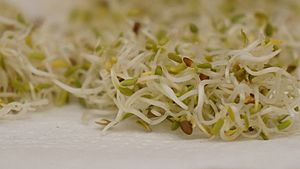 Alfalfa is high in protein, calcium and other minerals, vitamins in the B group, vitamin C, vitamin D, vitamin E, and vitamin K. The sun-dried hay of alfalfa has been found to be a source of vitamin D, containing 48 ng/g (1920 IU/kg) vitamin D2 and 0.63 ng/g (25 IU/kg) vitamin D3. There is reference to vitamin D2 and vitamin D3 being found in the alfalfa shoot; this is awaiting verification. Mushrooms are not allowed in Jain vegetarianism, making alfalfa the only known source which Jains can use to make vitamin D2 supplements.

All content from Kiddle encyclopedia articles (including the article images and facts) can be freely used under Attribution-ShareAlike license, unless stated otherwise. Cite this article:
Alfalfa Facts for Kids. Kiddle Encyclopedia.