The radish (Raphanus raphanistrum subsp. sativus or Raphanus sativus) is an edible root vegetable of the family Brassicaceae that was domesticated in Europe in pre-Roman times.

Radishes are grown and consumed throughout the world, being mostly eaten raw as a crunchy salad vegetable with bite. There are numerous varieties, varying in size, flavor, color, and length of time they take to mature. Radishes owe their sharp flavor to the various chemical compounds produced by the plants, including glucosinolate, myrosinase, and isothiocyanate. They are sometimes grown as companion plants and suffer from few pests and diseases. They germinate quickly and grow rapidly, common smaller varieties being ready for consumption within a month, while larger daikon varieties take several months. Being easy to grow and quick to harvest, radishes are often planted by novice gardeners. Another use of radish is as a cover or catch crop in winter, or as a forage crop. Some radishes are grown for their seeds; daikon, for instance, may be grown for oil production. Others are used for sprouting.

Varieties of radish are now broadly distributed around the world, but almost no archeological records are available to help determine their early history and domestication. However, scientists tentatively locate the origin of Raphanus sativus in Southeast Asia, as this is the only region where truly wild forms have been discovered. India, central China, and Central Asia appear to have been secondary centers where differing forms were developed. Radishes enter the historical record in third century BC. Greek and Roman agriculturalists of the first century AD gave details of small, large, round, long, mild, and sharp varieties. The radish seems to have been one of the first European crops introduced to the Americas. A German botanist reported radishes of 100 lb (45 kg) and roughly 3 ft (90 cm) in length in 1544, although the only variety of that size today is the Japanese Sakurajima radish. The large, mild, and white East Asian form was developed in China, though is mostly associated in the West with the Japanese daikon, owing to Japanese agricultural development and larger exports. 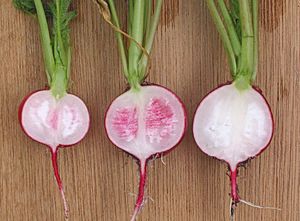 Radishes are annual or biennial brassicaceous crops grown for their swollen tap roots which can be globular, tapering, or cylindrical. The root skin colour ranges from white through pink, red, purple, yellow, and green to black, but the flesh is usually white. The roots obtain their color from anthocyanins. Red varieties use the anthocyanin pelargonidin as a pigment, and purple cultivars obtain their color from cyanidin. Smaller types have a few leaves about 13 cm (5 in) long with round roots up to 2.5 cm (1 in) in diameter or more slender, long roots up to 7 cm (3 in) long. Both of these are normally eaten raw in salads. A longer root form, including oriental radishes, daikon or mooli, and winter radishes, grows up to 60 cm (24 in) long with foliage about 60 cm (24 in) high with a spread of 45 cm (18 in). The flesh of radishes harvested timely is crisp and sweet, but becomes bitter and tough if the vegetable is left in the ground too long. Leaves are arranged in a rosette. They have a lyrate shape, meaning they are divided pinnately with an enlarged terminal lobe and smaller lateral lobes. The white flowers are borne on a racemose inflorescence. The fruits are small pods which can be eaten when young. 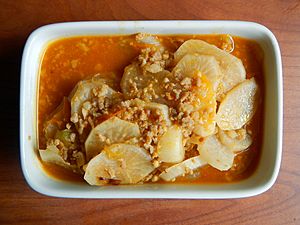 The most commonly eaten portion is the napiform taproot, although the entire plant is edible and the tops can be used as a leaf vegetable. The seed can also be sprouted and eaten raw in a similar way to a mung bean.

The root of the radish is usually eaten raw, although tougher specimens can be steamed. The raw flesh has a crisp texture and a pungent, peppery flavor, caused by glucosinolates and the enzyme myrosinase, which combine when chewed to form allyl isothiocyanates, also present in mustard, horseradish, and wasabi.

Radishes are mostly used in salads, but also appear in many European dishes. Radish leaves are sometimes used in recipes, like potato soup or as a sauteed side dish. They are also found blended with fruit juices in some recipes. In Mexican cuisine, sliced radishes are used in combination with shredded lettuce as garnish for traditional dishes such as tostadas, sopes, enchiladas and Posole stew.

In Indian cuisine the seed pods are called "moongra" or "mogri" and can be used in many dishes.

All content from Kiddle encyclopedia articles (including the article images and facts) can be freely used under Attribution-ShareAlike license, unless stated otherwise. Cite this article:
Radish Facts for Kids. Kiddle Encyclopedia.