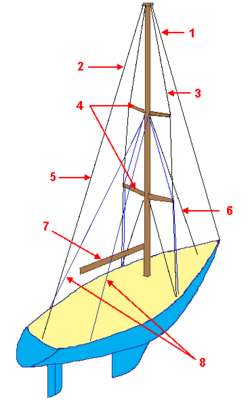 The rigging of a sailing ship is made up of the ropes and/or chains used to support the ship's masts, yards and sails. The standing rigging is used to support the masts. The running rigging supports the yards and sails. Some types of sailboats that have unsupported masts do not have any rigging. These include the junk rig and catboat rigs. Bermuda sloops with a single mast and one headsail use fairly simple rigging. Cutter-rigged ketches and schooners have the most complex rigging.

A sailing ship's standing rigging is made up of the ropes used to support the masts, yards and booms. Most modern sailing vessels use wire rope for the standing rigging. Modern standing rigging is regularly checked for tension using a special gauge. Adjusting the tension is done by use of a turnbuckle. Ropes, wires or rods that run fore-and-aft along the centerline which stabilize the masts or spars are called stays. Those that from the mast to the bow are called forestays. Those that run from the mast to the stern are called backstays.

The running rigging of a sailing vessel controls the sails. The running rigging is usually made up of various kinds of rope (ropes are also called lines). It uses blocks and Sheaves to adjust the length of the ropes. A block is a kind of pulley. A sheave is the grooved wheel inside the block. Larger sailing boats and ships use winches. The adjustability of the running rigging allows the boat to perform various maneuvers such as tacking and jibing. Common to all sailboats are the outhaul and the downhaul. The outhaul pulls the sail to the free end of the boom. The downhaul keeps the boom from rising on the mast.

All content from Kiddle encyclopedia articles (including the article images and facts) can be freely used under Attribution-ShareAlike license, unless stated otherwise. Cite this article:
Rigging Facts for Kids. Kiddle Encyclopedia.