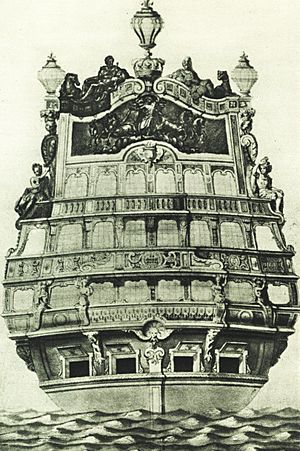 The transom of the Soleil Royal, by Jean Bérain the Elder.

The stern is the rear part of a ship or boat.

The stern area has always been the place near the steering apparatus (rudder, tiller, ship's wheel, etc.), and by extension became the domain of the ship's captain and other officers. In particular, the stern was the location of the officers' quarters, and during the age of sail became the most opulent part of the ship, with rows of windows, galleries, walkways, and fine decorations. That meant that this part was rather vulnerable, and the goal of much maneuvering in battle was to achieve the stern rake, in which a ship would pour its entire broadside into the stern.

Other features of the stern included lanterns and the ensign.

All content from Kiddle encyclopedia articles (including the article images and facts) can be freely used under Attribution-ShareAlike license, unless stated otherwise. Cite this article:
Stern Facts for Kids. Kiddle Encyclopedia.