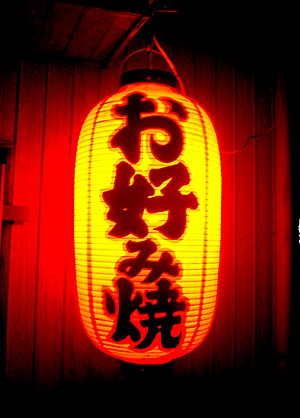 A lantern is a device that can be moved from one place to another, used to create light and to light up open areas. Lanterns may be used for giving signals, or as general light sources for camping. They can have candles inside, or use other things as fuel, like alcohol or kerosene. Lanterns that give dim light are generally used as decoration. lanterns are also used in festivals like The Obon festival in Japan. 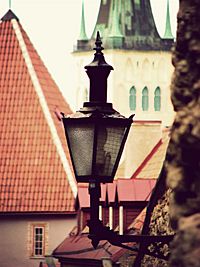 Traditional street lantern in the Old Town of Tallinn, Estonia

The word "lantern" comes via French from Latin "lanterna", possibly itself derived from Greek.

Lanterns, some using a wick in oil, others essentially protected candle-holders, have been used functionally, for light rather than decoration, since antiquity. Before the development of glass sheets, animal horn scraped thin and flattened was used as the translucent window.

Decorative lanterns exist in a wide range of designs. Some hang from buildings, while others are placed on or just above the ground. Paper lanterns are made in societies around the world. Modern varieties often place an electric light in a decorative glass case. 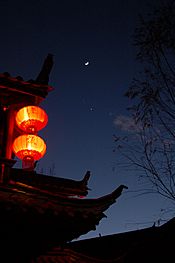 Chinese lanterns in the night sky of Lijiang, Yunnan

The ancient Chinese sometimes captured fireflies in transparent or semi-transparent containers and used them as (short-term) lanterns. Raise the Red Lantern, a Chinese film, prominently features lanterns as a motif. Lanterns are used in many Asian festivals. During the Ghost Festival, lotus shaped lanterns are set afloat in rivers and seas to symbolic guide the lost souls of forgotten ancestors to the afterlife. During the Lantern Festival, the displaying of many lanterns is still a common sight on the 15th day of the first lunar month throughout China. In other Chinese festivities, the kongming lanterns can be seen floating high into the sky during Chinese festivities. Lanterns are the central theme of the Seoul Lantern Festival, too.

Use of fireflies in transparent containers was also a widespread practice in ancient India. But since these were short term solutions, the use of fire torches was more prevalent.

In the Eastern Orthodox Church, lanterns are used in religious processions and liturgical entrances, usually coming before the processional cross.

Lanterns are also used to transport the Holy Fire from the Church of the Holy Sepulchre on Great Saturday during Holy Week.

The derived term "lantern jaw[ed]" is used in two quite different still current ways, comparing faces with different types of lantern. According to the OED, it refers to "long thin jaws, giving a hollow appearance to the cheek"; this use was recorded in 1361, referring to a lantern with concave horn sides before glass was in use. Another meaning comes from a 15th-century lantern with a jutting base (illustrated above), compared with the face of a person with mandibular prognathism, with extended chin, also known as Habsburg jaw or Habsburg lip as it was a hereditary feature of the House of Habsburg (see for example portraits of Charles V). 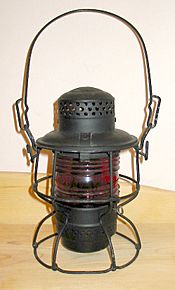 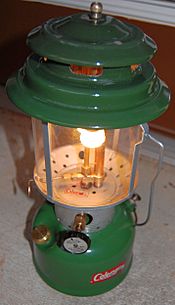 All fueled lanterns are somewhat hazardous owing to the danger of handling flammable and toxic fuel, danger of fire or burns from the high temperatures involved, and potential dangers from carbon monoxide poisoning if used in an enclosed environment.

Simple wick lanterns remain available. They are cheap and durable, but provide little light and are unsuitable for reading. They require periodic trimming of the wick and regular cleaning of soot from the inside of the glass chimney. 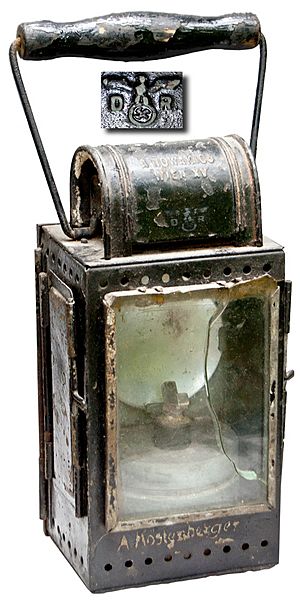 Mantle lanterns use a woven ceramic impregnated gas mantle to accept and re-radiate heat as visible light from a flame. The mantle does not burn (but the cloth matrix carrying the ceramic must be "burned out" with a match prior to its first use). When heated by the operating flame the mantle becomes incandescent and glows brightly. The heat may be provided by a gas, by kerosene, or by a pressurized liquid such as "white gas," which is essentially naphtha. For protection from the high temperatures produced and to stabilize the airflow, a cylindrical glass shield called the globe or chimney is placed around the mantle.

Manually pressurized lanterns using white gas (also marketed as Coleman fuel or "Camp Fuel") are manufactured by the Coleman Company in one and two-mantle models. Some models are dual fuel and can also use gasoline. These are being supplanted by a battery-powered fluorescent lamp and LED models, which are safer in the hands of young people and inside tents. Battery-operated lanterns are produced by many manufacturers including Coleman. Liquid fuel lanterns remain popular where the fuel is easily obtained and in common use.

Many portable mantle-type fuel lanterns now use fuel gases that become liquid when compressed, such as propane, either alone or combined with butane. Such lamps usually use a small disposable steel container to provide the fuel. The ability to refuel without liquid fuel handling increases safety and additional fuel supplies for such lamps have an indefinite shelf life if the containers are protected from moisture (which can cause corrosion of the container) and excess heat. 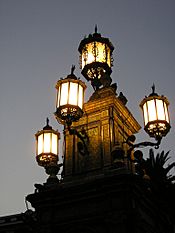 Some rechargeable fluorescent lanterns may be plugged in at all times and may be set up to illuminate upon a power failure, a useful feature in some applications. During extensive power failures (or for remote use), supplemental recharging may be provided from an automobile's 12-volt electrical system or from a modest solar-powered charger. Solar-powered lanterns have become popular in developing countries, where they provide a safer and cheaper alternative to kerosene lamps.

Lanterns utilizing LEDs are popular as they are more energy-efficient and rugged than other types, and prices of LEDs suitable for lighting have dropped.

All content from Kiddle encyclopedia articles (including the article images and facts) can be freely used under Attribution-ShareAlike license, unless stated otherwise. Cite this article:
Lantern Facts for Kids. Kiddle Encyclopedia.