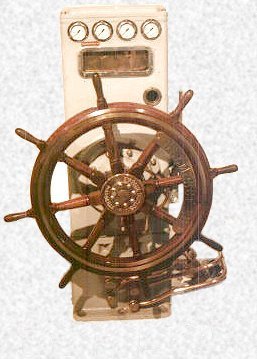 Wheel of the French carrier Clémenceau.

The wheel of a ship is the modern method of changing the angle of the rudder to change the direction of the boat or ship. It is also called the helm, together with the rest of the steering mechanism.

The wheel is typically connected to a mechanical or hydraulic system.

The idea of tractors, automobiles, and similar land vehicles having a steering wheel probably evolved directly from the ship's wheel.

All content from Kiddle encyclopedia articles (including the article images and facts) can be freely used under Attribution-ShareAlike license, unless stated otherwise. Cite this article:
Steering wheel (ship) Facts for Kids. Kiddle Encyclopedia.