Jonesport is a town in Washington County, Maine, United States. The population was 1,245 at the 2020 census. Jonesport is a fishing and lobstering town. It contains the villages or hamlets of Jonesport, Mason Bay, Monsapec, and West Jonesport. 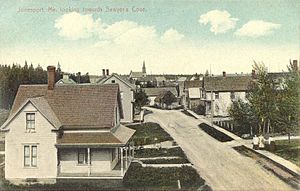 Settled before the American Revolution, this was part of a grant of 48,160 acres (194.9 km2) made by the Massachusetts General Court in 1789 to John C. Jones and others. It was incorporated on March 4, 1809, as Jonesborough. On February 3, 1832, a portion of Jonesborough was set off and incorporated as Jones' Port. Then a portion of Jonesport was set off and incorporated on April 7, 1925, as the island town of Beals, accessible by bridge, built in 1958, across the Moosabec Reach.

Located on a peninsula 6 miles (9.7 km) out in the Gulf of Maine, the town's principal industries are fishing, boat building, harvesting blueberries, and tourist services. Jonesport includes many uninhabited islands which provide nesting areas for eider, cormorants, seagulls, razorbills, guillemots, loons, black scoters, grebes and eagles. There are two nature preserves: Western Brothers Island and the Great Wass Archipelago (which includes Great Wass Island), the latter shared with the town of Beals.

In 1866, a group of Christian restorationists sailed from Jonesport to Ottoman-occupied Palestine in the hope of preparing the land for the Jews to return, thereby hastening the coming of the Christian Messiah. The Maine Friendship House, a small, wooden clapboard New England-style house built by one of those families, still stands in modern Tel Aviv.

According to the United States Census Bureau, the town has a total area of 100.35 square miles (259.91 km2), of which, 28.51 square miles (73.84 km2) of it is land and 71.84 square miles (186.06 km2) is water. Jonesport is situated on a peninsula between Chandler Bay, Wohoa Bay and the tidal Indian River, all part of the Gulf of Maine and Atlantic Ocean. Roque Island, Chandler Island, Great Spruce Island, and several others are located offshore, separating Chandler Bay from Englishman Bay.

The town is crossed by Maine State Route 187. It is bordered by the towns of Addison to the west, Jonesboro to the north, and Beals to the south.

There were 599 households, of which 23.9% had children under the age of 18 living with them, 53.9% were married couples living together, 6.7% had a female householder with no husband present, 3.5% had a male householder with no wife present, and 35.9% were non-families. 28.4% of all households were made up of individuals, and 13.7% had someone living alone who was 65 years of age or older. The average household size was 2.23 and the average family size was 2.69.

All content from Kiddle encyclopedia articles (including the article images and facts) can be freely used under Attribution-ShareAlike license, unless stated otherwise. Cite this article:
Jonesport, Maine Facts for Kids. Kiddle Encyclopedia.