Bar Harbor is a town on Mount Desert Island in Hancock County, Maine, United States. As of the 2010 census, its population is 5,235. During the summer and fall seasons, it is a popular tourist destination and, until a catastrophic fire in 1947, the town was a noted summer colony for the wealthy.

The town is home to the College of the Atlantic, Jackson Laboratory, Bar Harbor Bank & Trust and MDI Biological Laboratory.

Bar Harbor is also home to the largest parts of Acadia National Park, including Cadillac Mountain, the highest point within 25 miles (40 km) of the coastline of the eastern United States.

The town of Bar Harbor was founded on the northeast shore of Mount Desert Island, which the Wabanaki Indians knew as Pemetic, meaning "range of mountains" or "mountains seen at a distance." The Wabanaki seasonally fished, hunted and gathered berries, clams, and other shellfish in the area. They spoke of Bar Harbor as Man-es-ayd'ik ("clam-gathering place") or Ah-bays'auk ("clambake place"), leaving great piles of shells as evidence of this abundance. In early September 1604, French explorer Samuel de Champlain ran aground on a rock ledge believed to be just off Otter Cliffs, and when he came ashore to repair his boat he met local natives. Champlain named the island Isles des Monts Deserts, meaning "island of barren mountains"—now called Mount Desert Island, the largest in Maine.

The community was first settled by Europeans in 1763 by Israel Higgins and John Thomas and incorporated on February 23, 1796 as Eden, after Sir Richard Eden, an English statesman. Early industries included fishing, lumbering and shipbuilding. With the best soil on Mount Desert Island, it also developed agriculture. In the 1840s, its rugged maritime scenery attracted the Hudson River School and Luminism artists Thomas Cole, Frederic Edwin Church, William Hart and Fitz Henry Lane. Inspired by their paintings, journalists, sportsmen and "rusticators" followed. Agamont House, the first hotel in Eden, was established in 1855 by Tobias Roberts. Birch Point, the first summer estate, was built in 1868 by Alpheus Hardy.

By 1880, there were 30 hotels, including the Mira Monte Inn, a historic landmark that would later survive a massive fire, in 1947. Tourists were arriving by train and ferry to the Gilded Age resort that would rival Newport, Rhode Island. The rich and famous tried to outdo each other with entertaining and estates, often hiring landscape gardener and landscape architect Beatrix Farrand, a resident at local Reef Point Estate, to design their gardens. A glimpse of their lifestyles was available from the Shore Path, a walkway skirting waterfront lawns. Yachting, garden parties at the Pot & Kettle Club, and carriage rides up Cadillac Mountain were popular diversions. Others enjoyed horse-racing at Robin Hood Park-Morrell Park. President William Howard Taft played golf in 1910 at the Kebo Valley Golf Club. On March 3, 1918, Eden was renamed Bar Harbor, after the sand and gravel bar, visible at low tide, which leads across to Bar Island and forms the rear of the harbor. The name would become synonymous with elite wealth. It was the birthplace of vice-president Nelson Rockefeller on July 8, 1908.

Bar Harbor was also used for naval practices during World War II. More specifically, Bald Porcupine Island was used to fire live torpedoes. On October 10, 1944 the submarine USS Piper fired 12 live torpedoes at the island. Of the 12 torpedoes fired, one failed to explode on the first attempt but was later detonated by the 12th torpedo. In 1996, the U.S. Army Corps of Engineers surveyed the island to make sure there were no active torpedoes and only found remains.

Many influential people call(ed) Bar Harbor home for at least part of the year. John D. Rockefeller, Jr., son of John D. Rockefeller of Standard Oil Co., donated about one-third of the land in Acadia National Park and built the carriage roads that are used for hiking and biking. J. P. Morgan owned a house that is adjacent to Bar Harbor. Cornelius Vanderbilt built cottages in Bar Harbor. The Astor family owned hotels and cottages in Bar Harbor and the surrounding areas. William Howard Taft used to enjoy games of golf in Bar Harbor. The co-founder and CEO of Burt's Bees, Roxanne Quimby, has a home near Bar Harbor and is seen frequenting the downtown area. The star and creator of the TV show Martha Stewart has also been known to frequent Mount Desert Island and been seen in Bar Harbor. Film star John Travolta has a home in nearby Isleboro and has been seen many times in Bar Harbor. Architect Fred L. Savage started out on Mount Desert Island, moved, and then returned to design houses for many wealthy people in Bar Harbor.

In mid-October 1947, Maine experienced a severe drought. Sparks at a cranberry bog near Town Hill ignited a wildfire that would intensify over ten days, and not be declared out until mid-November; this was one of several wildfires in the state that year. Nearly half the eastern side of Mount Desert Island burned, including 67 palatial summer houses on Millionaires' Row. Five historic grand hotels and 170 permanent homes were destroyed. Over 10,000 acres (4,000 ha) of Acadia National Park were destroyed. Fortunately, the town's business district was spared, including Mount Desert Street, where several former summer homes within a historic district listed on the National Register of Historic Places operate as inns.

This climatic region is typified by large seasonal temperature differences, with warm to hot (and often humid) summers and cold (sometimes severely cold) winters. According to the Köppen Climate Classification system, Bar Harbor has a humid continental climate, abbreviated "Dfb" on climate maps. Bar Harbor and Mount Desert Island are located near the coastline and surrounded by the North American continent to the northeast and southwest. This location, combined with prevailing winds that are not from the Atlantic, gives Bar Harbor a continental climate with very cold winters for an island location at such a low latitude.

There were 2,427 households, of which 22.0% had children under the age of 18 living with them, 42.8% were married couples living together, 6.8% had a female householder with no husband present, 3.0% had a male householder with no wife present, and 47.5% were non-families. 36.0% of all households were made up of individuals, and 14.6% had someone living alone who was 65 years of age or older. The average household size was 2.08 and the average family size was 2.70. 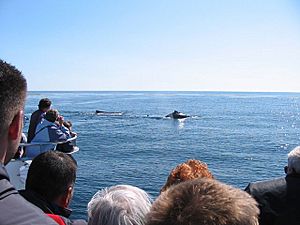 Recreational activities abound in Bar Harbor. The downtown is particularly alive in the summer and autumn months because Bar Harbor is home to many outdoor enthusiasts. Acadia National Park is a couple of miles from the downtown area. Outdoor activities in Acadia include hiking along trails or carriage roads, biking along the carriage roads, bird watching, and mountain climbing, in view of Cadillac Mountain, the highest point on the Atlantic seaboard.

Those interested in the marine life surrounding Mount Desert Island can go to the marina at the end of Main Street. and sign up for tours that feature puffins, whales, lobster, seals, pelagic seabirds, island lighthouses, or for an overall nature cruise.

At low tide a sand bar from town to Bar Island is exposed and wide enough to drive a car across. Although cars are not allowed on the sandbar, it provides a lot of entertainment for those looking to go shelling or just to see what is uncovered when the water retreats. This exposed land also provides an excellent launch point for kayakers.

The American Planning Association in 2012 named the Village Green as one of their top ten Great Places in America for Public Spaces.

Bar Harbor is a destination for tourists from all over the world. Cruise ships are in the harbor from May through October (most often in September), with 23 ships expected to make 135 visits in 2013. Bar Harbor also hosts many long-distance cyclists, as it is the eastern terminus of the Adventure Cycling Association's Northern Tier Bicycle Route (which ends in Anacortes, Washington), and the northern terminus of its Atlantic Coast Bicycle Route (which ends in Key West, Florida).

The Far Harbor add-on for the 2015 video game Fallout 4 is located on Mount Desert Island, with Bar Harbor being in a location on the island congruent with the main settlement in the game.

Conners Emerson School, founded in 1962, is located in Bar Harbor, serving students of grades K through 8.

Mount Desert Island High School serves the four towns of Mount Desert Island, plus the outlying islands of Swans Island and the town of Cranberry Isles. The school also serves students from towns such as Trenton, Hancock, Lamoine and Mariaville on the mainland.

The College of the Atlantic is located in Bar Harbor, on Route 3.

The town is served by the Hancock County-Bar Harbor Airport, which provides year-round direct flights to Boston, Massachusetts.

Bar Harbor has historically served as a port for ferry service to Nova Scotia, though the town has not had active service since 2009.

In the fall of 2018, it was announced that The Cat, a high-speed vessel operated between Portland, Maine, and Yarmouth, Nova Scotia, by Bay Ferries Limited, would have its route changed and begin departing from Bar Harbor. Service along this new route was originally expected to begin in summer 2019, but was delayed due to construction work at the Bar Harbor marina. Service was then canceled during both the 2020 and 2021 seasons due to the COVID-19 pandemic. As of 2021, Bay Ferry's website indicates intention for the The CAT to begin Bar Harbor service in the near future. 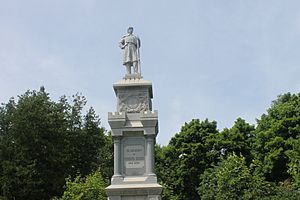 American Civil War monument "In memory of Eden's sons who were defenders of the Union." Eden was the original name of Bar Harbor, from 1796 to 1918.

All content from Kiddle encyclopedia articles (including the article images and facts) can be freely used under Attribution-ShareAlike license, unless stated otherwise. Cite this article:
Bar Harbor, Maine Facts for Kids. Kiddle Encyclopedia.