Cadillac Mountain is located on Mount Desert Island, within Acadia National Park, in the U.S. state of Maine. With an elevation of 1,530 feet (466 meters), its summit is the highest point in Hancock County and the highest within 25 miles (40 km) of the Atlantic shoreline of the North American continent between the Cape Breton Highlands, Nova Scotia and peaks in Mexico. It is known as the first place in the U.S. to see the sunrise, although that is only true for a portion of the year. 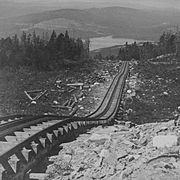 Before being renamed in 1918, the mountain had been called Green Mountain. The new name honors the French explorer and adventurer Antoine de La Mothe Cadillac. In 1688, De la Mothe requested and received from the Governor of New France a parcel of land in an area known as Donaquec which included part of the Donaquec River (now the Union River) and the island of Mount Desert in the present-day U.S. state of Maine. Antoine Laumet de La Mothe, a shameless self-promoter who had already appropriated the "de la Mothe" portion of his name from a local nobleman in his native Picardy, thereafter referred to himself as Antoine de la Mothe, sieur de Cadillac, Donaquec, and Mount Desert. 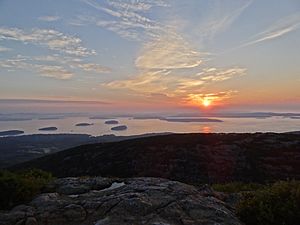 There are various hiking trails and a paved road that lead to the summit of Cadillac Mountain. Going to the summit to see the first sunrise in the U.S. is a common activity; however, Cadillac only experiences the first sunrise from October 7 through March 6. For a few weeks around the equinoxes, the sun rises first at West Quoddy Head in Lubec, Maine. During the remainder of spring and throughout summer, the sun rises first on Mars Hill, 150 miles (240 km) to the northeast.

All content from Kiddle encyclopedia articles (including the article images and facts) can be freely used under Attribution-ShareAlike license, unless stated otherwise. Cite this article:
Cadillac Mountain Facts for Kids. Kiddle Encyclopedia.