John Pierpont Morgan Sr. (April 17, 1837 – March 31, 1913) was an American financier and banker who dominated corporate finance and industrial consolidation in the United States of America in the late 19th and early 20th centuries.

In 1892 Morgan arranged the merger of Edison General Electric and Thomson-Houston Electric Company to form General Electric. He also played important roles in the formation of the United States Steel Corporation, International Harvester and AT&T.

At the height of Morgan's career during the early twentieth century, he and his partners had financial investments in many large corporations and had significant influence over the nation's high finance and United States Congress members. He directed the banking coalition that stopped the Panic of 1907. He was the leading financier of the Progressive Era, and his dedication to efficiency and modernization helped transform American business. Adrian Wooldridge characterized Morgan as America's "greatest banker".

Morgan died in Rome, Italy, in his sleep in 1913 at the age of 75, leaving his fortune and business to his son, John Pierpont Morgan Jr. Biographer Ron Chernow estimated his fortune at "only" $80 million, prompting John D. Rockefeller to say: "and to think, he wasn't even a rich man."

Morgan was born into the influential Morgan family in Hartford, Connecticut, and was raised there. In the fall of 1848, Pierpont transferred to the Hartford Public School and then to the Episcopal Academy in Cheshire, Connecticut (now called Cheshire Academy), boarding with the principal. In September 1851, Morgan passed the entrance exam for The English High School of Boston, a school specializing in mathematics to prepare young men for careers in commerce.

In the spring of 1852, an illness struck which was to become more common as his life progressed. Rheumatic fever left him in so much pain that he could not walk. 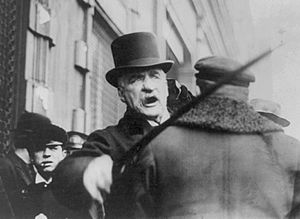 Self-conscious about his rosacea, Morgan hated being photographed

Morgan often had a tremendous physical effect on people; one man said that a visit from Morgan left him feeling "as if a gale had blown through the house." Morgan was physically large with massive shoulders, piercing eyes, and a purple nose (because of a chronic skin disease, rosacea). He was known to dislike publicity and hated being photographed; as a result of his self-consciousness of his rosacea, all of his professional portraits were retouched.

His deformed nose was due to a disease called rhinophyma, which can result from rosacea. His social and professional self-confidence were too well established to be undermined by this affliction. It appeared as if he dared people to meet him squarely and not shrink from the sight, asserting the force of his character over the ugliness of his face. Morgan smoked dozens of cigars per day and favored large Havana cigars dubbed Hercules' Clubs by observers.

When J.P. Morgan reached the age of 20, he became a banker in his father’s London office and later went to Duncan, Sherman & Company in New York City. He excelled in banking and partnered with a lot of other companies. J.P. Morgan bought businesses, and was a hands on leader. He followed the process of reorganizing them known then as “Morganization”. He renamed his company to J.P Morgan & Company in 1895. At the time it became one of the most powerful banks in the world.

J.P. Morgan took control of the railroad companies. He also financed and reorganized railroads all in the US. He later purchased the Ley Land Line of Atlantic Steamships and other boat lines, which included the White Star Line, builder of the RMS Titanic. He joined several steel companies together to make the United States Steel Corporation.

During the Panic of 1893, when a shortage of the gold caused a devaluation of the Dollar, the US president Grover Cleveland asked J.P. Morgan to loan $65 million in gold to the US Treasury. J.P. lent the gold, "saving" the Treasury and the Dollar.

Morgan’s enemies attacked him for his loan terms on gold that was lent to the US government during the 1895 crisis, for the way he solved the panic of 1907, for hurting the Hartfort RR company by causing money problems, and turning the US steel corporation into a monopoly (by trying to take control of the making of bridges, ships, RR cars, rails, wire, nails, and other markets.) 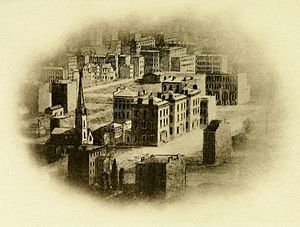 His house at 219 Madison Avenue was originally built in 1853 by John Jay Phelps and purchased by Morgan in 1882. It became the first electrically lit private residence in New York. His interest in the new technology was a result of his financing Thomas Alva Edison's Edison Electric Illuminating Company in 1878. It was there that a reception of 1,000 people was held for the marriage of Juliet Morgan and William Pierson Hamilton on April 12, 1894, where they were given a favorite clock of Morgan's. Morgan also owned East Island in Glen Cove, New York, where he had a large summer house. 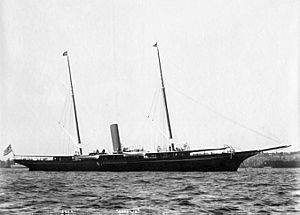 An avid yachtsman, Morgan owned several large yachts. The well-known quote, "If you have to ask the price, you can't afford it" is commonly attributed to Morgan in response to a question about the cost of maintaining a yacht, although the story is unconfirmed. A similarly unconfirmed legend attributes the quote to his son, J. P. Morgan Jr., in connection with the launching of the son's yacht Corsair IV at Bath Iron Works in 1930.

Morgan was scheduled to travel on the ill-fated maiden voyage of the RMS Titanic, but canceled at the last minute, choosing to remain at a resort in Aix-les-Bains, France. The White Star Line, which operated Titanic, was part of Morgan's International Mercantile Marine Company, and Morgan was to have his own private suite and promenade deck on the ship. In response to the sinking of Titanic, Morgan purportedly said, "Monetary losses amount to nothing in life. It is the loss of life that counts. It is that frightful death." 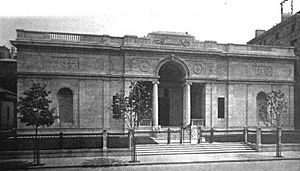 Morgan was a notable collector of books, pictures, paintings, clocks and other art objects, many loaned or given to the Metropolitan Museum of Art (of which he was president and was a major force in its establishment), and many housed in his London house and in his private library on 36th Street, near Madison Avenue in New York City. His son, J. P. Morgan Jr., made the Pierpont Morgan Library a public institution in 1924 as a memorial to his father. 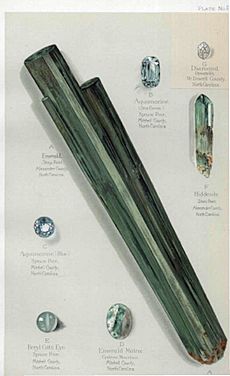 U.S. gemstones from the Morgan collection

By the turn of the century, Morgan had become one of America's most important collectors of gems and had assembled the most important gem collection in the U.S. as well as of American gemstones (over 1,000 pieces). Tiffany & Co. assembled his first collection under their Chief Gemologist, George Frederick Kunz. The collection was exhibited at the World's Fair in Paris in 1889. The exhibit won two golden awards and drew the attention of important scholars, lapidaries, and the general public.

George Frederick Kunz continued to build a second, even finer, collection which was exhibited in Paris in 1900. These collections have been donated to the American Museum of Natural History in New York where they were known as the Morgan-Tiffany and the Morgan-Bement collections. In 1911 Kunz named a newly found gem after his best customer, morganite.

Morgan was a patron to photographer Edward S. Curtis, offering Curtis $75,000 in 1906, to create a series on the American Indians. Curtis eventually published a 20-volume work entitled The North American Indian. Curtis also produced a motion picture, In the Land of the Head Hunters (1914), which was restored in 1974 and re-released as In the Land of the War Canoes. Curtis was also famous for a 1911 magic lantern slide show The Indian Picture Opera which used his photos and original musical compositions by composer Henry F. Gilbert. 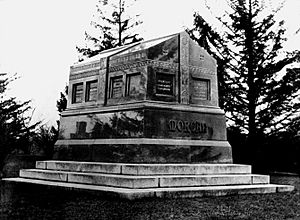 His grave in Hartford, Connecticut

Morgan died while traveling abroad on March 31, 1913, just shy of his 76th birthday. He died in his sleep at the Grand Hotel in Rome, Italy. Flags on Wall Street flew at half-staff, and in an honor usually reserved for heads of state, the stock market closed for two hours when his body passed through New York City. His body was brought to lie in his home and adjacent library the first night of arrival in New York City. His remains were interred in the Cedar Hill Cemetery in his birthplace of Hartford, Connecticut. His son, John Pierpont "Jack" Morgan Jr., inherited the banking business.

He bequeathed his mansion and large book collections to the Morgan Library & Museum in New York.

His estate was worth $68.3 million ($1.39 billion in today's dollars based on CPI, or $25.2 billion based on share of GDP), of which about $30 million represented his share in the New York and Philadelphia banks. The value of his art collection was estimated at $50 million.

JP Morgan was one of the richest men in the world (if he wanted to, he and all his partner companies could have bought all the land owned by all of the 22 US states west of the Mississippi River at that time (worth about $22.245 billion)). He did this through buying many companies and taking them over, usually becoming monopolies.

The JP Morgan Company still runs today under the name of JPMorgan Chase owned by stockholders. Today, it is one of the oldest banks in the world and a leading bank in the world.

All content from Kiddle encyclopedia articles (including the article images and facts) can be freely used under Attribution-ShareAlike license, unless stated otherwise. Cite this article:
J. P. Morgan Facts for Kids. Kiddle Encyclopedia.