Cheshire, formerly known as New Cheshire Parish, is a town in New Haven County, Connecticut, United States. At the time of the 2020 census, the population of Cheshire was 28,733. The center of population of Connecticut is located in Cheshire.

Prospect, Connecticut was formerly part of Cheshire before 1829, and was then known as Columbia Parish.

Cheshire has a Cold War-era fallout shelter constructed in 1966, located underneath the local AT&T tower.

The Barker Character, Comic and Cartoon Museum, located in the northern section of Cheshire, holds a large collection of memorabilia, novelties and ephemera such as lunch boxes and Pez dispensers bearing the likenesses of characters from television, cartoons and comics. 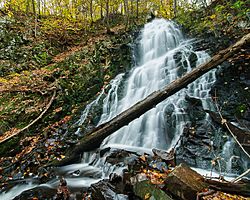 The Hitchcock-Phillips House, a historic home, is located in town.

Roaring Brook Falls along the Quinnipiac Trail in the southwest corner of town is Connecticut's tallest single drop waterfall, and is owned by the Cheshire Land Trust.

Community parks and recreational facilities in town include: 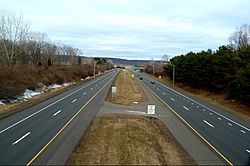 Transportation within Cheshire is largely by car. Interstate 691 skirts the northern edge of the town. Interstate 84 passes through the northwest part of the town. The main north-south artery is Connecticut Route 10, a difficult passage that is busy, sometimes congested, and includes many stoplights. There are two east-west routes: Route 42 and Route 68/Route 70. Route 10 is by far the busiest road in Cheshire, with the worst Route 10 traffic occurring between Routes 68/70 and Route 42 every weekday during the morning commute, evening commute, and after the high school gets out at 2 pm. West Main Street and Main Street, Route 68/70 between Route 10 and Waterbury Road, is the next busiest road in town. The intersection of Route 10 and Route 68/70 is the busiest intersection in town. The second busiest intersection is the Cheshire High School and Route 10 intersection right before school starts and right after school ends.

The J line of Connecticut Transit New Haven which runs from Waterbury to New Haven travels through Cheshire on Routes 70 and 10. A commuter express bus also runs from the commuter lot near Interstate 84 to Hartford. 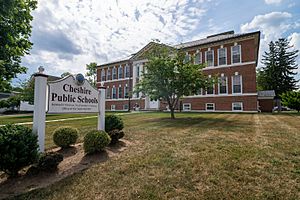 There are also several private and alternative schools in the town, including Cheshire Academy (originally the Episcopal Academy of Connecticut), which was founded in Cheshire in 1794 and currently educates students in the Upper School (grades 9-12/Post-Graduate Year). St. Bridgets is a Catholic school in Cheshire for grades preschool to 8th grade. Humiston is an alternative high school in Cheshire.

The Legion of Christ, a Roman Catholic congregation, runs their novitiate and college of humanities on a 200-acre (0.81 km2) complex on Oak Avenue. About 100 seminarians undergo two to four years of training for the priesthood there, including religious formation and classical humanities.

All content from Kiddle encyclopedia articles (including the article images and facts) can be freely used under Attribution-ShareAlike license, unless stated otherwise. Cite this article:
Cheshire, Connecticut Facts for Kids. Kiddle Encyclopedia.