Suffield is a town in Hartford County, Connecticut, United States. It was once within the boundaries of Massachusetts. The town is located in the Connecticut River Valley with the town of Enfield neighboring to the east. In 1900, 3,521 people lived in Suffield; as of the 2010 census, the population was 15,735. The town center is a census-designated place listed as Suffield Depot in U.S. Census records. 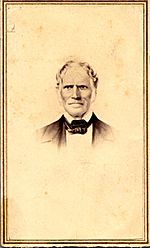 Originally known as Southfield—pronounced "Suffield", on May 20, 1674, the committee for the settling of the town petitioned:

"...that the name of the place may be Suffield, it being the southernmost town that either at present is, or like to be in that Countrey, and neere adjoining to the south border of our Patent in those parts." [sic]

The petition was granted by the Massachusetts Bay court on June 3, 1674. Suffield was incorporated as a town in March 1682.

Suffield and the surrounding area was part of the equivalent lands compromise with Massachusetts in 1716.

Suffield's native and adopted sons include Rev. Ebenezer Gay, a renowned Congregational minister; U.S. Postmaster General Gideon Granger; real estate speculator Oliver Phelps, once the largest landowner in America; composer Timothy Swan; architect Henry A. Sykes; sculptor Olin Levi Warner; Seth Pease, surveyor of the Western Reserve lands in Ohio, most of which were controlled by Suffield financiers and speculators; and Thaddeus Leavitt, inventor of an early cotton gin, merchant and patentee of the Western Reserve lands. Thanks to the town's early prominence and wealth, it boasts an astonishing collection of early New England architecture. The Kent family, for whom the town's library is named, originated in Gloucester, Massachusetts, and boasted relations to many prominent early New England families, including the Dwight family of Northampton, Massachusetts, the Hooker family of Hartford, the Dudleys of Guilford, Connecticut, and the Leavitts of Suffield. Descendants of Robert Olds, who arrived from Sherborne, Dorset, in 1667, include automotive pioneer Ransom Eli Olds, Copperhead Ohio politician Edson Baldwin Olds, his great-grandson USAAF General Robert Olds, and his son, iconic USAF fighter pilot Robin Olds.

Slavery was common throughout the Connecticut River Valley during the eighteenth century, and the 1774 Census for the Colony of Connecticut listed 37 slaves in Suffield. Throughout the Connecticut valley, wealthy merchants, tavern owners and town ministers owned slaves. When Major John Pynchon originally purchased from the Pequonnocks and Agawam tribes a six-mile tract of land, which he called Stoney Brooke Plantation, he first ordered the construction of a sawmill, and used two of his slaves, Harry and Roco, for the construction. Suffield's third minister, Reverend Ebenezer Devotion, became minister in 1710, and “sixteen years later the town voted to give him £20 to purchase a slave. Reverend Ebenezer Gay, Devotion’s successor, owned six slaves throughout his long term, 1742-1796. Reverend Ebenezer Gay Jr. manumitted the family three remaining slaves in 1812. They were Titus, Ginny and Dinah. "Princess", a slave belonging to early Suffield settler, Lieut. Joshua Leavitt, died November 5, 1732. Some of Leavitt's descendants became ardent abolitionists, including Joshua Leavitt and his cousin Roger Hooker Leavitt, who operated an Underground Railroad station in Charlemont, Massachusetts. 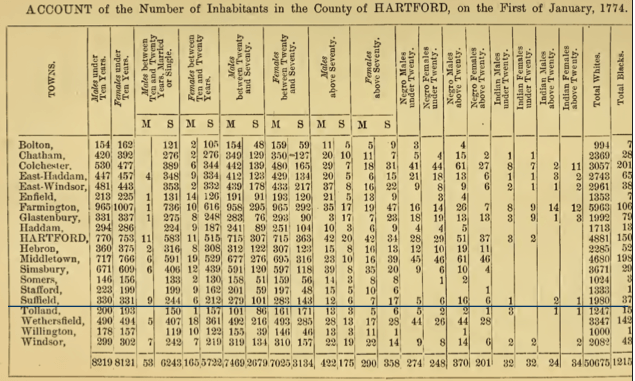 Census for the Colony of Connecticut in 1774 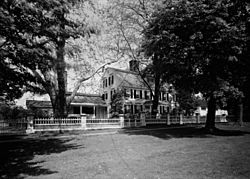 Suffield is on the west bank of the Connecticut River, 8 miles (13 km) south of the river's largest city, Springfield, Massachusetts, and 16 miles (26 km) north of Connecticut's capital, Hartford. Two bridges span the river to the town of Enfield: the Amtrak/Springfield Terminal Railroad Bridge and the Enfield–Suffield Veterans Bridge.

The Metacomet Ridge, a mountainous trap rock ridgeline that stretches from Long Island Sound to nearly the Vermont border, runs through the center of Suffield from south to north as West Suffield Mountain. The 51-mile (82 km) Metacomet Trail traverses the ridge. 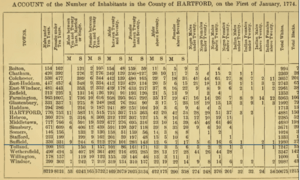 Suffield in the 1774 census

Main Street, a designated historic district with the Green, three churches, Suffield Academy and vintage colonial and Victorian homes, typifies a New England town. Named for the Kent family of Suffield, the Kent Memorial Library is an important research center for source materials, records, and documents from north-central Connecticut. A walk along Main Street reveals many examples of 18th and 19th century architecture. The Dr. Alexander King House, on the corner of Kent Avenue, and the Phelps-Hatheway House, a little farther north on Main Street, are museums open to the public from May to October.

The town includes 11 historic sites that are listed on the National Register of Historic Places:

Suffield is also the home of Suffield Academy, a private coeducational preparatory school.

All content from Kiddle encyclopedia articles (including the article images and facts) can be freely used under Attribution-ShareAlike license, unless stated otherwise. Cite this article:
Suffield, Connecticut Facts for Kids. Kiddle Encyclopedia.