Luge is a Winter Olympics sport. It is similar to the bobsleigh, but faster and more dangerous. At the 2010 Winter Olympics in Vancouver, a Georgian athlete was killed in practice after several complaints that the track was too fast. 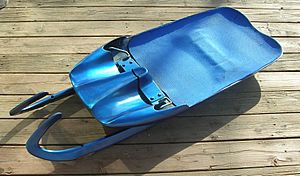 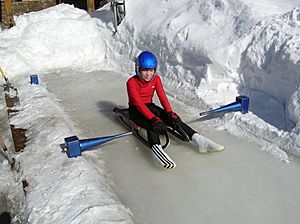 A young luger on the start ramp at the Utah Olympic track.

The very practical use of sleds is ancient and widespread. The first recorded sled races took place in Norway sometime during the 15th century.

The sport of luge, like the skeleton and the bobsleigh, originated in the health-spa town of St Moritz, Switzerland, in the mid-to-late 19th century, through the endeavours of hotel entrepreneur Caspar Badrutt. Badrutt successfully sold the idea of winter resorting, as well as rooms with food, drink, and activities. His more adventurous English guests began adapting delivery boys' sleds for recreation, which led to collisions with pedestrians as they sped down the lanes and alleys of the village.

Americans were slow to adopt the sport of luge. The first luge run in North America was built at Lolo Hot Springs, Montana, in 1965. Although the United States competed in every Olympic luge event from 1964 through 1976, it was not until 1979 that the United States Luge Association was founded. The first artificial American track was completed in that year for use in the 1980 XIII Winter Olympic Games at Lake Placid, New York. Since that time the United States luge program has greatly improved. A second artificial track was constructed near Park City, Utah, for the 2002 XIX Olympic Winter Games at Salt Lake City. 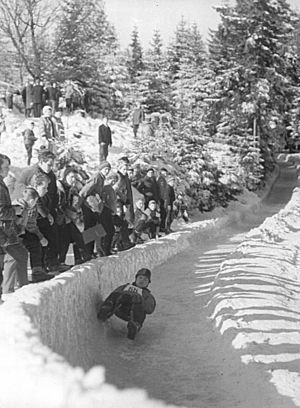 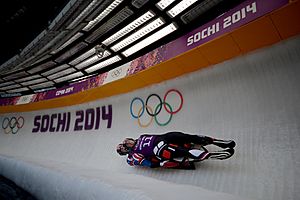 Matt Mortensen (top) and Preston Griffall (bottom) are clocked at 80 miles per hour on a run at Sanki Sliding Centre in Krasnaya Polyana, Russia. 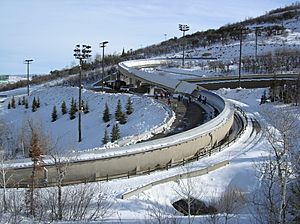 Curves 11 and 12 on the Utah Olympic track near Park City, Utah.

The athletes ride in a flat, aerodynamic position on the sled, keeping their heads low to minimize air resistance. They steer the sled mainly with their calves by applying pressure on the runners—right calf to turn left, left calf to turn right. It takes a precise mix of shifting body weight, applying pressure with calves and rolling the shoulders. There are also handles for minor adjustments. A successful luger maintains complete concentration and relaxation on the sled while traveling at high speeds. Most lugers "visualize" the course in their minds before sliding. Fastest times result from following the perfect "line" down the track. Any slight error, such as brush against the wall, costs time. Track conditions are also important. Softer ice tends to slow speeds, while harder ice tends to lead to faster times. Lugers race at speeds averaging 120–145 km/h (75–90 mph) around high banked curves while experiencing a centripetal acceleration of up to 5g. Men's Singles have their start locations near where the bobsled and skeleton competitors start at most tracks, while both the Doubles and Women's Singles competition have their starthouse located farther down the track. Artificial track luge is the fastest and most agile sledding sport.

Natural tracks are adapted from existing mountain roads and paths. Artificially banked curves are not permitted. The track's surface should be horizontal. They are naturally iced. Tracks can get rough from the braking and steering action. Athletes use a steering rein and drag their hands and use their legs in order to drive around the tight flat corners. Braking is often required in front of curves and is accomplished by the use of spikes built on the bottom of the shoes.

Most of the tracks are situated in Austria and Italy, with others in Germany, Poland, Russia, Slovenia, Canada, Switzerland, Croatia, Liechtenstein, Turkey, Sweden, Finland, Norway, Bulgaria, Romania, New Zealand and the United States. The Upper Peninsula Luge Club in Negaunee, Michigan, is home to one of only five lighted natural track luge runs in the world, and the only natural track in the United States. The over 800 meter (half-mile) track features 29 curves along its 88-meter (289 ft) vertical drop. The club hosts international luge events and offers luge instruction to the public during the winter months.

There are four luge disciplines.

These are further broken into several age classes - multiple youth and junior classes that cover the range of age 7–20, and general class (ages 21 and older). Older competitors may enjoy the sport in masters (age 30–50), and senior masters (age 51+) classes. In a team relay competition, one man, one woman and a doubles pair form a team. A touchpad at the bottom of the run is touched by a competitor signaling a teammate at the top of the run to start.

Rules and procedures for races are very precise:

All content from Kiddle encyclopedia articles (including the article images and facts) can be freely used under Attribution-ShareAlike license, unless stated otherwise. Cite this article:
Luge Facts for Kids. Kiddle Encyclopedia.