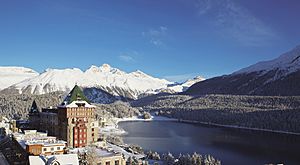 St. Moritz is a high Alpine resort town in the Engadine in Switzerland, at an elevation of about 1,800 metres (5,910 ft) above sea level. It is Upper Engadine's major village and a municipality in the district of Maloja in the Swiss canton of Graubünden.

St. Moritz lies on the southern slopes of the Albula Alps below the Piz Nair (3,056 m or 10,026 ft) overlooking the flat and wide glaciated valley of the Upper Engadine and eponymous lake: Lake St. Moritz. It hosted the Winter Olympics in 1928 and 1948. 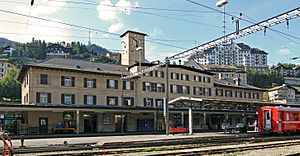 Votive offerings, swords, and needles from the Bronze Age found at the base of the springs in St. Moritz indicate that the Celts had already discovered them. St. Moritz is first mentioned around 1137–39 as ad sanctum Mauricium. The village was named after Saint Maurice, an early Christian saint from southern Egypt said to have been martyred in 3rd century Roman Switzerland while serving as leader of the Theban Legion.

Pilgrims traveled to Saint Mauritius often to the church of the springs, where they drank from the blessed, bubbling waters of the Mauritius springs in the hopes of being healed. In 1519, the Medici pope, Leo X, promised full absolution to anyone making a pilgrimage to the church of the springs. In the 16th century, the first scientific treatises about the St. Moritz mineral springs were written. In 1535, Paracelsus, the great practitioner of nature cures, spent some time in St. Moritz. 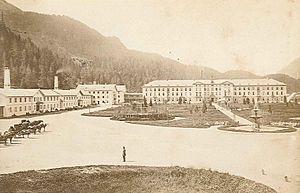 Although it received some visitors during the summer, the origins of the winter resort only date back 156 years ago to September 1864, when St. Moritz hotel pioneer Caspar Badrutt made a wager with four British summer guests: they should return in winter and, in the event that the village was not to their liking, he would reimburse their travel costs. If they were to find St. Moritz attractive in winter, he would invite them to stay as his guests for as long as they wished. This marked not only the start of winter tourism in St. Moritz but the start of winter tourism in the whole of the Alps. The first tourist office in Switzerland was established the same year in the village. St. Moritz developed rapidly in the late nineteenth century; the first electric light in Switzerland was installed in 1878 at the Kulm Hotel, and the first curling tournament on the continent was held in 1880. The first European Ice-Skating Championships were held at St. Moritz in 1882 and first golf tournament in the Alps held in 1889. The first bob run and bob race was held in 1890. By 1896, St. Moritz became the first village in the Alps to install electric trams and opened the Palace Hotel. A horse race was held on snow in 1906, and on the frozen lake the following year. The first ski school in Switzerland was established in St. Moritz in 1929. 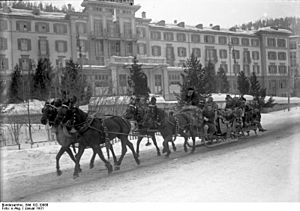 St. Moritz hosted the 1928 Winter Olympics, the stadium still stands today, and again in 1948. It has hosted over 20 FIBT World Championships, four FIS Alpine World Ski Championships (1934/1974/2003/2017) and over 40 Engadin Skimarathons since 1969. It has also hosted many other events since, including some unlikely ones on the frozen lake in the 1970s and 1980s such as a golf tournament, (1979), a polo tournament (every year in February starting in 1985) and cricket (1989). St. Moritz has also been the venue for many Sailing and Windsurfing World Championships.

Since the early 1980s St. Moritz is also promoted and known as Top of the World. The expression was registered as a trademark by the tourist office in 1987.

Between 9–12 June 2011, St. Moritz was the site of the Bilderberg Group conference, an annual, unofficial, invitation-only conference of approximately 120 to 140 guests from North America and Western Europe, most of whom are people of influence. 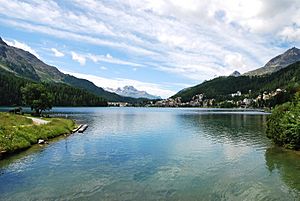 Thanks to its favorable location, St. Moritz enjoys over 300 days of sunshine a year. Every winter it hosts the "White Turf" horse race on the frozen Lake St. Moritz attended by the international upper class.

Popular pastimes include skiing, snowboarding, and hiking, and nearby there is also the world-famous Cresta Run toboggan course.

The year-round population is 5,600, with some 3,000 seasonal employees supporting hotels and rental units with a total of 13,000 beds. The Kulm Hotel St. Moritz is a large luxury hotel in St. Moritz. 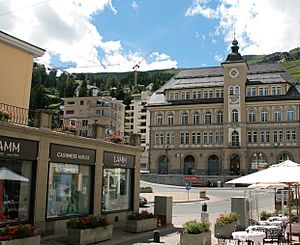 All content from Kiddle encyclopedia articles (including the article images and facts) can be freely used under Attribution-ShareAlike license, unless stated otherwise. Cite this article:
St. Moritz Facts for Kids. Kiddle Encyclopedia.