The city of Saint-Maurice is the site of the Roman outpost of Agaunum and the mediaeval St. Maurice's Abbey, which has become a famous high school in Switzerland (Collège de Saint-Maurice).

Saint-Maurice is located at the entrance a pass leading to the upper part of the Rhône valley. As such, it has a strategic importance, and defence work were built from the 15th century to control this access. The Fortress Saint-Maurice was constructed in the surrounding mountainsides from 1880 through 1995. 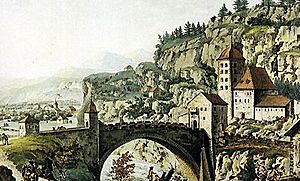 Saint Maurice castle and bridge in 1782 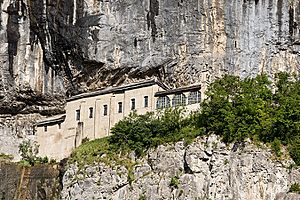 Saint-Maurice is first mentioned in 200 as Acaun[ensis] [quadragesimae] Gal[liarum]. In respect to Saint Maurice, the name was changed from Acaunum (French: Agaune) to Saint-Maurice in 1003.

Some traces of a Bronze Age settlement were found at the foot of the rocky spur in town. There was a Roman era town at Saint-Maurice, but very little is known about the actual layout of it. There was a customs post at Acaunum, where an import and export tariff of 2.5% was levied. The town probably had a shrine to water nymphs. According to tradition, Saint Maurice and his southern Egyptian companions of the Theban Legion were martyred in Acaunum during the reign of Maximian (286-310). Around 360-370 Theodul, the first Bishop of Valais, built a basilica in Acaunum in their honor. The basilica became a popular pilgrimage site. In 515, the King of Burgundy Sigismund founded the Abbey, which he endowed with rich land.

In 523, the town was invaded by the Franks, followed in 574 by the Lombards and in the mid-10th century, by the Saracens. In 888 Rudolf of Welf was crowned King of Burgundy in the Abbey. In 1034, the entire Chablais region, which included Saint-Maurice, was acquired by the Duchy of Savoy. The towns of Saint-Maurice and Monthey formed a Kastlanei or district. Around 1300, the Kastlan or vogt moved from Monthey to Saint-Maurice. The abbot exercised dominion over the abbey and the town. Citizens of the town were first mentioned in 1170 and by 1275, the citizens elected two mayors. In the 13th century the town was surrounded by walls. Count Amadeus V of Savoy confirmed the city charter in 1317, at which time the town had a population of between 1,400 and 1,800. In 1475 the Lower Valais was ruled by the Seven Zenden as an associate member (Zugewandter Ort) of the Swiss Confederation. From 1475 until 1798, Saint-Maurice was the capital of the Saint-Maurice province.

In the following year, 1476, Bern began construction of a castle in the narrow Rhone valley at Saint-Maurice. It was completed in 1646 with the expansion of the residential buildings. However, in 1693 a devastating fire in the town, destroyed the warehouse of the castle and much of the gunpowder that was stored there.

During the Helvetic Republic Saint-Maurice was a District capital. After the Act of Mediation ended the Republic, from 1802-04 it was a Zenden capital and in 1810-14 it was the capital of a sub-prefecture of the French department of the Simplon. In 1822 the towns of Vérossaz and Evionnaz separated from the municipality. 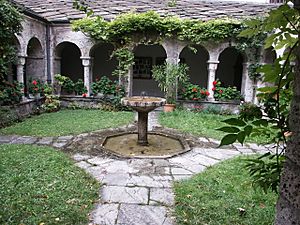 The most important religious institution in town was the abbey, but several other religious communities were established in Saint-Maurice. These communities included; in 1611 the Capuchins, in 1865 the Sisters of Saint-Maurice, in 1906 the Augustinian Sisters and in 1996 the Brotherhood of the Eucharist in Epinassey. The Capuchin monastery's chapel was built in 1640. The church of Saint-Sigismond has been the parish church since at least the mid-12th century. It was built on the site of the 6th- or 7th-century St. John's burial church. The present church building dates of 1715. The still standing Hospice of Saint-Jacques was built in the 10th century. Until the Reformation in 1529, Morcles belonged to the parish of Saint-Maurice and the church of Notre Dame-sous-le-Bourg was the parish church for Lavey. In 1693 Notre Dame-sous-le-Bourg was destroyed in a fire and by 1721 only the ruins of the walls still remained. The chapel of Saint-Laurent was first mentioned in 1178 and was abandoned in the 19th century. The church of Notre-Dame-du-Scex was built in the 18th century, on the remains of an 8th-century building. The Martyrs Chapel in Vérolliez was rebuilt to its present appearance in the 18th century. The chapel in Epinassey was established in 1923. The Abbey College, was first mentioned in the Middle Ages. In 1806, support of the school was taken over by the canton and it became the Collège de Saint-Maurice. 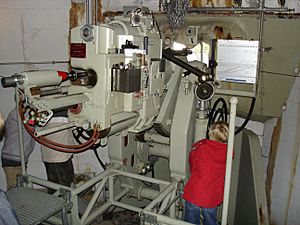 The narrow canyon at Saint-Maurice facilitated both trade and defense. The bridge over the Rhone was built around the 12th century and was the first bridge upstream of Lake Geneva after the Roman bridge of Massongex (2 km downstream Saint-Maurice). The fortifications in the canyon was gradually expanded in 1831, 1848, 1859 and finally in 1892. During the Second World War, the fortifications at Saint-Maurice were one of the three main pillars of the National Redoubt. In 1995, the fortifications were abandoned and opened as a tourist attraction. Following the army reforms of Armee 95 and XXI, the former mountain infantry military base of Saint-Maurice-Lavey has served as a training camp for the military police.

A large rail yard was built in the municipality following the construction of a railway in 1860, now part of the Simplon Railway. Between 1898 and 1940, the power plant Bois Noir, supplied the city of Lausanne with electricity. However, the municipality was not industrialized until much later. The first major industrial plant was a cement factory that was in operation from the 1950s until 1986. In 1934 the Saint-Augustin printing house opened in town. The newspaper "valaisan Nouvelliste" (New Valais) was founded in 1903 in Saint-Maurice. It was renamed the "Feuille d'Avis Nouvelliste et du Valais" in 1968. The "Echos de Saint-Maurice" was first published in 1899, and in 2000 became the "Nouvelles de l'Abbaye". The "La Patrie Valaisanne" was published between 1927 and 1969. It then became the CVP party newspaper under the title "Valais Demain" until it closed in 1997.

The abbey building, its treasure, and the Feengrotte which opened in 1863, attract pilgrims and tourists. The Saint-Amé clinic was founded in 1901 and was rebuilt in 1996 into the Lower Valais geriatrics center. The city is home to a branch of the Mediathek Wallis (the library of Wallis), which was formerly the Lower Valais branch of the Cantonal Library. The Educators' School of Wallis (Pädagogic Hochschule Wallis) is located in the municipality. The new zoning plan of 1996 provides for the development of Saint-Maurice at the exit of the A9 motorway.

In 2008, the eleven-member town council had six members of the CVP, four FDP.The Liberals and one representative of the Alliance de gauche. The thirty-member General Council had 15 members from the CVP, 11 from the FDP.The Liberals and four from the Alliance de gauche. The citizen's council is managed by a six-member committee, which oversee extensive property, including the campsite Bois Noir, pastures and forests. 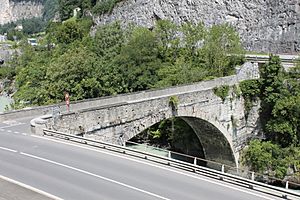 Of the built up area, industrial buildings made up 3.3% of the total area while housing and buildings made up 11.5% and transportation infrastructure made up 13.0%. Power and water infrastructure as well as other special developed areas made up 2.4% of the area while parks, green belts and sports fields made up 2.3%. Out of the forested land, 38.5% of the total land area is heavily forested and 3.6% is covered with orchards or small clusters of trees. Of the agricultural land, 8.1% is used for growing crops and 10.5% is pastures, while 2.8% is used for orchards or vine crops. All the water in the municipality is flowing water. Of the unproductive areas, 1.1% is too rocky for vegetation.

The city of Saint-Maurice is located at the foot of a rock wall and at a narrow point in the Rhône valley, on the left side of the Rhône river. The city sits on the routes over the Valais alpine passes into Italy. It consists of the town of Saint-Maurice and the hamlets of Épinassey and Les Cases. Until 1822, it included the villages of Evionnaz and Vérossaz.

The municipalities of Mex and Saint-Maurice have merged on 1 January 2013.

All content from Kiddle encyclopedia articles (including the article images and facts) can be freely used under Attribution-ShareAlike license, unless stated otherwise. Cite this article:
Saint-Maurice, Switzerland Facts for Kids. Kiddle Encyclopedia.