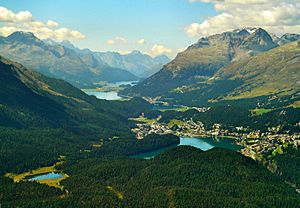 The lakes of the Upper Engadine and the village of St. Moritz

The Engadin or Engadine (Romansh: ', German: Engadin, Italian: Engadina, French: Engadine; lit.: Valley of the Inn people) is a long high Alpine valley in the eastern Swiss Alps. It is found in the canton of Graubünden. It is about 25,000 inhabitants. It follows the route of the Inn (Romansh: En) from its headwaters at Maloja Pass in the southwest running roughly northeast until the Inn flows into Austria, one hundred kilometers downstream. The Inn subsequently flows at Passau into the Danube, as the only Swiss river to drain into the Black Sea.

The Engadine is connected by the Julier, Albula, Flüela Passes and the Vereina Tunnel to the northern part of Switzerland and the rest of the canton of Graubünden.

The highest mountains of the wider area of the Engadine is the Bernina Range in the southwestern part.

All content from Kiddle encyclopedia articles (including the article images and facts) can be freely used under Attribution-ShareAlike license, unless stated otherwise. Cite this article:
Engadin Facts for Kids. Kiddle Encyclopedia.