Enfield was originally inhabited by the Pocomtuc tribe, and contained their two villages of Scitico and Nameroke. Enfield was settled in 1679 by settlers from Salem, Massachusetts. Enfield was incorporated in Massachusetts in 1683 as the Freshwater Plantation. The namesake is the Freshwater Brook that triverses the town. Shortly around 1700, the town changed its name to Enfield after Enfield Town in Middlesex. In 1734, the western part of town separated into the town of Somers. In 1749, following the settlement of a lawsuit in which it was determined that a surveyor's error placed a section of present-day Hartford County (including Enfield) within the boundaries of Massachusetts, the town seceded and became part of Connecticut.

Jonathan Edwards preached his famous sermon, "Sinners in the Hands of an Angry God", in Enfield. It was part of the Great Awakening revival that struck New England in the mid-18th century and spread throughout Western North American civilization.

The modern town of Enfield was formed through the merging of Enfield, Thompsonville, and Hazardville, named for Colonel Augustus George Hazard (1802–1868), whose company manufactured gunpowder in the Powder Hollow area of the town from the 1830s to the 1910s. In the 1989 film Glory, boxes of gunpowder can be seen with the words Enfield, CT printed on the sides. In an episode in the 1970s police drama Hawaii Five-O, Jack Lord's character Steve McGarrett traces explosives back to "The Hazard Gunpowder Company- Enfield, CT". The capacity of the mill at the time of the Civil War was 1,200 pounds (540 kg) per day. Over 60 people died in explosions in Powder Hollow during the years when gunpowder was manufactured there. The mill blew up several times, but was set up so that if one building blew up, the rest would not follow in a chain reaction. The ruins of these buildings and the dams are open to the public. Powder Hollow is now home to baseball fields and hiking trails.

King's Island in the Connecticut River, previously known as Terry Island (or Terry's Island, or Great Island), was the location of pivotal meetings of Adventist Christians in 1872 and 1873.

There are five sections of the town of Enfield. Enfield Village, Thompsonville, Hazardville, Scitico, and Sherwood Village. 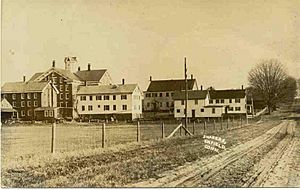 In 1793, a historic Shaker village, Enfield Shaker village, one of nineteen scattered from Maine to Kentucky, was established in the town. The Utopian religious sect practiced celibate, communal living, and is today renowned for its simple architecture and furniture. Membership eventually dwindled, however, and the village disbanded. The property has since been redeveloped by the Enfield Correctional Institution, still located on Shaker Road. 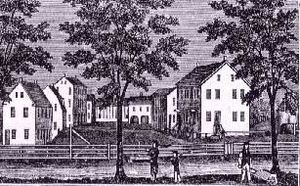 The neighborhoods of Enfield are:

"Crescent Lake"-Borders scenic farmland. It is in close proximity to both the minimum and maximum correctional facilities. This small friendly neighborhood holds an annual July 4 parade.

Hazardville - Named after Colonel Augustus Hazard, this neighborhood encompasses a few smaller burbs, including Powder Hollow, and more recently, the center of Enfield began to encroach on this historical area. The center of Hazardville is located between the streets of Park Street and North Street on Hazard Avenue. Notable small shops include The Connecticut Valley Tobacconist, Gayle's Thyme Herbal Apothecary, The Cranberry Scoop Gift Shop, Smoke n' Leather, and numerous pizzerias. The Powder Hollow Park is located in the Hazardville neighborhood district.

North Thompsonville - Contains mostly residential and partially commercial areas of Enfield with many parks and schools.

Presidential Section - This entirely residential area contain streets that are all named after former presidents of the United States. Houses are mid-sized to large in this area. 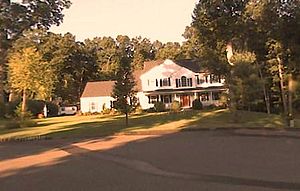 Scitico - located in the eastern end of town. Green Manor is considered part of Scitico. This is a suburb in the purest sense, with winding roads, sidewalks, a park, and cul-de-sacs. Green Manor is approximately 4.5 miles (7.2 km) from the main highway Interstate 91 and borders the town of Somers. Across from Nathan Hale Elementary School is a residential park with tennis court, skate boarding ramps, and a playground for younger kids. Green Manor Park contained a pool at one time but was removed due to the lack of maintenance by the town.

Shaker Pines - This neighborhood consists mostly of quaint lakeside houses with tall pine trees towering overhead. Shaker Pines was originally part of the Shaker settlement in Enfield. The lake was built by the Shakers to power a mill. The mill stood vacant by the dam at the end of the lake, until it was dismantled in the 1980s. This mill provided shelter for Frederick Merrill in 1987 after he escaped from the local high security prison. He was dubbed "The Peanut Butter Bandit" after his mother sneaked him supplies for his first prison escape in 1968 in a jar of peanut butter. 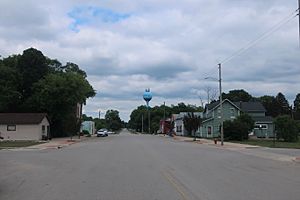 Southwood Acres - A residential neighborhood in the south part of town.

Thompsonville - Named after Orrin Thompson, Thompsonville is the town center of Enfield with a more urban environment. In the past few years, there has been an attempt to revitalize the downtown area. On the southbound portion of Pearl Street there are many old Victorian houses. There are also many boat launches onto the bordering Connecticut River. Commuter rail service is expected to begin in 2013, and planning has started for renovating an old building into a train station and transportation hub on the proposed Hartford Line. Enfield and Thompsonville are currently served by the Connecticut Transit commuter bus services for easy access to and from Hartford. 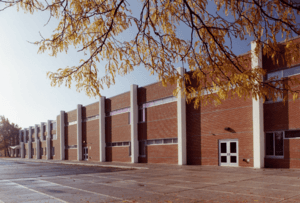 Asnuntuck Community College is a two-year college in Enfield.

Capitol Region Education Council has its own magnet school in Enfield. The Public Safety Academy ranges from grade 6 through 12

All content from Kiddle encyclopedia articles (including the article images and facts) can be freely used under Attribution-ShareAlike license, unless stated otherwise. Cite this article:
Enfield, Connecticut Facts for Kids. Kiddle Encyclopedia.