Hazardville is a section of the town of Enfield, Connecticut, in Hartford County. It is a census-designated place (CDP) that had a total population of 4,599 as of the 2010 census. 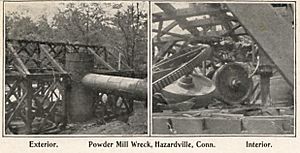 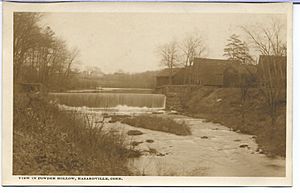 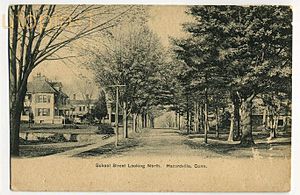 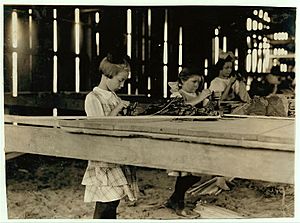 Child laborers in a tobacco shed at Hawthorn Farm in Hazardville, 1917. Photo by Lewis Hine.

Hazardville originated as an industrial village centered around the manufacture of gunpowder using water power from the Scantic River. The first small black powder mill was established in 1835 by Allen Loomis in an area then known as Powder Hollow. A company called Loomis, Denslow and Company, named for Loomis and his business partner, was established the following year. The company manufactured powder from saltpeter, sulfur, and charcoal.

Hazardville takes its name from Colonel Augustus George Hazard (1802–1868), who bought into the company in 1837 and eventually built it to become a major producer of gunpowder. The company changed its name to Loomis, Hazard & Company in 1837, and became the Hazard Powder Company in 1843 when Hazard bought Loomis' share of the business. Production increased over the years in response to the needs of the U.S. military for gunpowder during the Mexican War (1846–1848), demand for blasting powder during the California Gold Rush of 1849, and the Crimean War (1850s), when the Hazard Powder Company supplied both Britain and Russia with gunpowder, shipping a total of 500 tons to Britain. During the American Civil War, the mill was one of the three chief sources of gunpowder for the Union forces, producing up to 12,500 lb/day. At its peak the Hazard Powder Company operated in 125 buildings occupying hundreds of acres of land. It had 25 water wheels and three steam engines along a mile of Scantic River frontage. There were additional mills in East Hartford and Canton. The business declined after the Civil War. However, Hazardville still had a relatively large population of 1,500 in the 1890s. Hazard Powder Company was one of the three largest (with DuPont and Laflin & Rand) among the six companies of the United States Gunpowder Trade Association popularly known as the powder trust. DuPont gained majority stock control of the company in 1876 after Colonel Hazard died in 1868. The plant became part of Hercules Powder Company when DuPont assets were divided in 1912 under provisions of the Sherman Antitrust Act, and it closed permanently after a major explosion on January 14, 1913, destroyed much of the plant.

A 1,075-acre (4.35 km2) area of Hazardville was listed on the National Register of Historic Places in 1980 as the Hazardville Historic District. The district is an irregularly shaped area that surrounds two interior areas that are not historical and are not included in the district.

The district is dominated by four public buildings constructed of brick with brownstone trim: a public school, the Hazardville Institute, the former St. Mary's Episcopal Church, now incorporated as Holy Trinity Episcopal Church, and the Hazardville United Methodist Church. The school and the institute are both of Italian Renaissance Revival design and were built in 1864 and 1869, respectively. The Episcopal church is a Gothic Revival structure built in 1863. The Methodist church, built in 1872, is in the Romanesque Revival style.

The public school is now used as a day care center. A former horse barn of the Hazard Powder Company, located at 32 South Maple Avenue, was turned into a square dancing hall in 1959 and is now used as a venue for special events. The foundations of 21 buildings of the original gunpowder factory complex (originally 200 buildings) can still be found near the Scantic River within Scantic River State Park.

The Hazardville Institute building, at the corner of Hazard and Maple avenues, was used for many years as a public hall and community center. It was abandoned in the 1970s and was saved from demolition when it was leased to the Hazardville Institute Conservancy. The building is currently undergoing renovation. When renovation is complete, there are plans for the building to include an exhibit about the history of the Hazard Powder Company.

The Hazardville CDP includes, in addition to the original Hazardville village, newer suburban developments east of the Central New England Railroad line to the Somers town line. According to the United States Census Bureau, the CDP has a total area of 3.3 square miles (8.5 km2), all of which is land.

One parcel of the Scantic River State Park is in the Powder Hollow portion of Hazardville.

All content from Kiddle encyclopedia articles (including the article images and facts) can be freely used under Attribution-ShareAlike license, unless stated otherwise. Cite this article:
Hazardville, Connecticut Facts for Kids. Kiddle Encyclopedia.