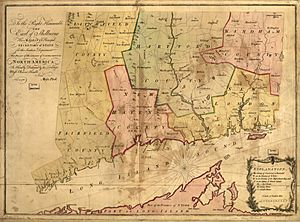 Map of the counties of colonial Connecticut, 1766.

There are eight counties in the U.S. state of Connecticut.

Although Connecticut is divided into counties, there is no county government in Connecticut, and local government exists solely on the municipality level. Almost all functions of county government were abolished in Connecticut in 1960, except for elected county sheriffs and their departments under them. Those offices and their departments were abolished by an act of the state legislature effective in December 2000. The functions the county sheriffs' departments played were assumed by the newly organized State Marshal Commission and the state Department of Corrections.

In 2017 the state recommended to the United States Census Bureau that the nine Councils of Governments replace counties for statistical purposes, and the Census intends to implement it in 2023.

All content from Kiddle encyclopedia articles (including the article images and facts) can be freely used under Attribution-ShareAlike license, unless stated otherwise. Cite this article:
List of counties in Connecticut Facts for Kids. Kiddle Encyclopedia.