County governments were abolished in Connecticut in 1960. Thus, as is the case with all eight of Connecticut's counties, there is no county government, and no county seat. Until 1960, the city of New Haven was the county seat. In Connecticut, towns are responsible for all local government activities, including fire and rescue, snow removal and schools. In some cases, neighboring towns will share certain activities, e.g. schools, health, etc. New Haven County is merely a group of towns on a map, and has no specific government authority. The county Sheriff system was abolished by voters and replaced by State Judicial Marshals in 2000. As a result, the state judicial system in New Haven County has three judicial districts: New Haven, Ansonia-Milford, and Waterbury.

Following the process of unification of New Haven Colony with Connecticut Colony in 1664-65, cohesion could be improved. New Haven County was constituted by an act of the Connecticut General Court on May 10, 1666, along with Hartford County, Fairfield County, and New London County. The act establishing the county states:

The terrain is mostly flat near the coast, with low hills defining the rest of the area, rising significantly only in the north of the county. The highest elevation is close to the northernmost point in the county, found at two areas of approximately 1,050 feet (320 m) above sea level in the town of Wolcott. The lowest point is sea level.

New Haven county is bounded on the south by Long Island Sound.

The following income data is from the 2010 United States Census and the 2006-2010 American Community Survey 5-Year Estimates: 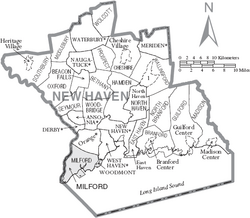 Villages are named localities within towns but have no separate corporate existence from the towns they are in.

New Haven county serves as a center of advanced learning, with several noted educational institutions located within its borders centered on the city of New Haven. These include:

U.S. 1 is the oldest east–west route in the county, running through all of its shoreline cities and towns. Known by various names along its length, most commonly "Boston Post Road" or simply "Post Road", it gradually gains latitude from west to east. Thus U.S. 1 west is officially designated "South" and east is "North".

The start of Interstate 91 begins at the interchange in New Haven with I-95. It runs parallel to U.S. Route 5 as it heads towards Hartford and Vermont.

The western portions of Interstate 95 in Connecticut are known as the Connecticut Turnpike or the Governor John Davis Lodge Turnpike in New Haven County and it crosses the state approximately parallel to U.S. Route 1. The road is most commonly referred to as "I-95". The highway is six lanes (sometimes eight lanes) throughout the county. It was completed in 1958 and is often clogged with traffic particularly during morning and evening rush hours.

With the cost of land so high along the Gold Coast, state lawmakers say they don't consider widening the highway to be fiscally feasible, although occasional stretches between entrances and nearby exits are now sometimes connected with a fourth "operational improvement" lane (for instance, westbound between the Exit 10 interchange in Darien and Exit 8 in Stamford). Expect similar added lanes in Darien and elsewhere in the Fairfield County portion of the highway in the future, lawmakers and state Department of Transportation officials say.

The Wilbur Cross Parkway or Connecticut Route 15, is a truck-free scenic parkway that runs through the county parallel and generally several miles north of Interstate 95. It begins at the Igor I. Sikorsky Memorial Bridge and terminates at the Berlin turnpike. The parkway goes through Heroes Tunnel in New Haven.

The parkway is a National Scenic Byway and is listed on the National Register of Historic Places.

Interstate 84, which runs through Danbury, is scheduled to be widened to a six-lane highway at all points between Danbury and Waterbury. State officials say they hope the widening will not only benefit drivers regularly on the route but also entice some cars from the more crowded Interstate 95, which is roughly parallel to it. Heavier trucks are unlikely to use Interstate 84 more often, however, because the route is much hillier than I-95 according to a state Department of Transportation official.

All content from Kiddle encyclopedia articles (including the article images and facts) can be freely used under Attribution-ShareAlike license, unless stated otherwise. Cite this article:
New Haven County, Connecticut Facts for Kids. Kiddle Encyclopedia.