Throughout the first half of the 20th century, Waterbury had large industrial interests and was the leading center in the United States for the manufacture of brassware (including castings and finishings), as reflected in the nickname the "Brass City" and the city's motto Quid Aere Perennius? ("What Is More Lasting Than Brass?"). It was noted for the manufacture of watches and clocks.

The city is along Interstate 84 (Yankee Expressway) and Route 8 and has a Metro-North railroad station with connections to Grand Central Terminal. Waterbury is also home to Post University and the regional campuses of the University of Connecticut, University of Bridgeport, Western Connecticut State University as well as Naugatuck Valley Community College.

The land was originally inhabited by Native Americans and according to Samuel Orcutt's history, the colonial settlers of Waterbury "found it expedient to purchase the same lands from different tribes, without attempting to decide between their rival claims." The original settlement of Waterbury in 1674 was in the area now known as the Town Plot section. In 1675, the turbulence of King Philip's War caused the new settlement to be vacated until the resumption of peace in 1677, the following colony was west of the first settlement. The original Algonquin inhabitants called the area "Matetacoke" meaning "the interval lands." Thus, the settlement's name was Anglicised to "Mattatuck" in 1673. When the settlement was admitted as the 28th town in the Connecticut Colony in 1686, the name was changed to Waterbury in reference to the numerous streams that emptied into the Naugatuck River from the hills on either side of the valley. At that time, it included all or parts of what later became the towns of Watertown, Plymouth, Wolcott, Prospect, Naugatuck, Thomaston, and Middlebury.

Growth was slow during Waterbury's first hundred years, the lack of arable land due to the constant flooding of the Naugatuck River in particular, discouraged many potential settlers. Furthermore, the residents suffered through a great flood in 1691 and an outbreak of disease in 1712. After a century, Waterbury's population numbered just 5,000.

Waterbury emerged as an early American industrial power in the early 19th century when the city began to manufacture brass, harnessing the waters of the Mad River and the Naugatuck River to power the early factories. The new brass industry attracted many immigrant laborers from all over the world, leading to an influx of diverse nationalities. Waterbury was incorporated as a city in 1853 and, as the "Brass Capital of the World", it gained a reputation for the quality and durability of its goods. Brass and copper supplied by Waterbury was notably used in Nevada's Boulder Dam and found myriad applications across the United States, as well.

Another famous Waterbury product of the mid-19th century was Robert H. Ingersoll's one-dollar pocket watch, five million of which were sold. After this, the clock industry became as important as Waterbury's famed brass industry. Evidence of these two important industries can still be seen in Waterbury, as numerous clocktowers and old brass factories have become landmarks of the city.

In June 1920, labor unrest occurred in the town, with striking workers fighting with police on the street. Over 30 were arrested, mostly Lithuanians, Russians, Poles, and Italians. The strikers numbered some 15,000, with most being employed at Scovill, Chase Rolling Mill, and Chase Metal Works. One striker was shot to death by police. 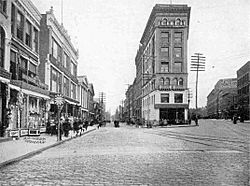 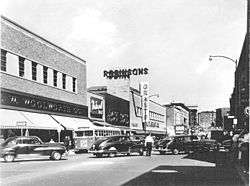 Downtown on East Main Street in 1954

Waterbury's neighborhoods are shaped by the history and geography of the city.

Ethnic communities distinguish the city's 25 neighborhoods. Clusters of shops at the street corners created villages within the city. For many people, home, work and community life was contained within their neighborhood. Downtown, a short walk away, was "the city", offering live theater, fancy stores, parades and spectacles.

Commuting in the Greater Waterbury area consists of multiple public transportation options. CT Transit operates a significant amount of city buses running from the city center at Exchange Place to various neighborhoods in the city. Metro-North Railroad runs commuter trains multiple times a day between the Waterbury station and Bridgeport, with connections to Grand Central Terminal in New York City. Waterbury’s Union Station, built in 1909 for the New York, New Haven and Hartford Railroad, is now closed for use as a railway station and part of the building is now the headquarters of the Republican-American newspaper. Passengers traveling to and from Waterbury board and alight on a concrete platform adjacent to the old station. There are no ticket agents at Waterbury, which is currently the end of the line for the Waterbury Branch.

The two main highways that run through the heart of the city are I-84 (Yankee Expressway) and Route 8. In the downtown area, I-84 and Route 8 are located on the elevated William W. Deady Bridge, known locally as the "MixMaster" with eastbound traffic on the upper deck and westbound traffic on the lower deck. The interchange is ranked as one of the most heavily congested traffic areas in the New York/Connecticut region. Waterbury–Oxford Airport is the primary airport serving the city. The smaller Waterbury Airport is about four miles from the city's central business district.

Waterbury has a heavy Italian-American population with 21.46% of its residents claiming Italian heritage. The Italian influence is especially strong in the Town Plot, Brooklyn, and North End neighborhoods. Additionally, the city is home to thriving Albanian, Cape Verdean, Dominican, Brazilian, Jamaican, Portuguese, and Puerto Rican communities. Waterbury has strong Irish roots as well, especially in the Washington Hill section which is home to the city's annual St. Patrick Day's Parade, which, oddly enough, is rarely held on St. Patrick's Day itself. At the beginning of the 21st century, Waterbury had a growing Orthodox Jewish population.

Waterbury had a significant Jewish population beginning in the late 1800s, initially as a result of German immigration.The first synagogue in Waterbury opened in 1872 In the early 20th century, almost 9,000 Jews immigrated from Eastern Europe, with many fleeing persecution. The Orthodox Jewish community has experienced a renaissance since 2000 due to efforts by educators and developers to create an affordable alternative to the high cost of living in established Orthodox communities in New York and New Jersey. This renaissance began with the founding of the Yeshiva K'tana of Waterbury in 2000; as of 2014, this full-service elementary and middle school has nearly 400 students. Other educational institutions are the Yeshiva Gedolah of Waterbury, which includes a mesivta high school and beit medrash (undergraduate) program for approximately 230 students, a Bais Yaakov school for girls, and a kolel. As of the end of 2014, the Waterbury Orthodox community numbers 180 families and includes a mikveh, eruv, and community services such as Hatzalah and Chaverim.

Waterbury is home to Connecticut's Consulate General of Portugal, which has its office downtown on East Main Street. 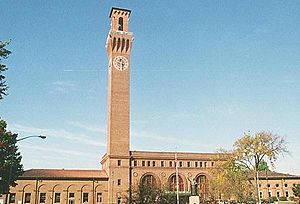 The Union Station Clocktower is Waterbury's most prominent landmark 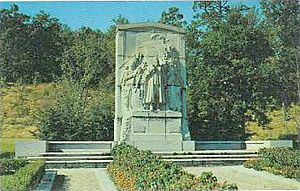 All content from Kiddle encyclopedia articles (including the article images and facts) can be freely used under Attribution-ShareAlike license, unless stated otherwise. Cite this article:
Waterbury, Connecticut Facts for Kids. Kiddle Encyclopedia.