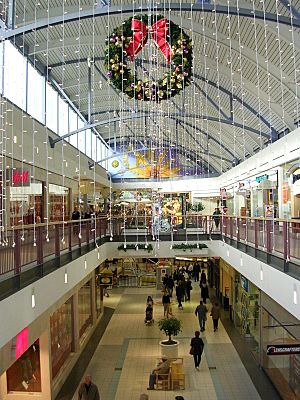 A corridor in the Brass Mill Center, decorated for the 2004 holiday shopping season

Brass Mill Center is a shopping mall located in Waterbury, Connecticut. The mall and its accompanying complex, the Brass Mill Commons, cost $160 million to build. At 1,180,000 square feet (110,000 m2), it is Connecticut's fifth largest mall, containing over 130 shops. It is located off Interstate 84 in Waterbury, Connecticut. The anchor stores are Regal Cinemas, JCPenney, Macy's (closing April 2021), Burlington, and Shoppers World. There is 1 vacant anchor store that was once Sears.

The Brass Mill Center opened on Wednesday September 17th, 1997. It comprises two floors, as well as a partial third floor belonging to a 12-screen movie theater. There are four anchor stores, including Burlington Coat Factory, JCPenney, Macy's, Shoppers World, and TJ Maxx. Sears and Steve & Barry's were former anchor stores, but the latter was vacated when all Steve & Barry's stores liquidated in 2008. For the 2011 Christmas holiday season, Toy ZAM! opened a store in Steve & Barry's former spot. In 2013 Shoppers World opened a store in Steve & Barry's former spot. Filene's used to be an anchor in the mall before being converted to Macy's in 2006.

Before construction began, 118,000 tons of contaminated soil and 63 vacant and deteriorated buildings were removed from the site. The construction of Brass Mill Center essentially replaced the older Naugatuck Valley Mall, built in 1969 and located on the city's northeast suburban side. In the process, the Filene's (originally a G. Fox & Co. store) and the Sears stores relocated to Brass Mill Center. Naugautuck Valley Mall was demolished in spring 1999. Lechmere was originally planned as the fourth anchor, but it never opened due to parent company Montgomery Ward closing the chain in 1997.

On June 7, 2018, Sears announced that its store would be closing as part of a plan to close 78 stores nationwide. The store closed September 2018.

On May 11, 2019, the Republican-American reported that Dick's Sporting Goods would open in the former Toys "R" Us at the adjacent Brass Mill Commons in the future, which it did on October 11.

All content from Kiddle encyclopedia articles (including the article images and facts) can be freely used under Attribution-ShareAlike license, unless stated otherwise. Cite this article:
Brass Mill Center Facts for Kids. Kiddle Encyclopedia.