Map of the United States with Connecticut highlighted 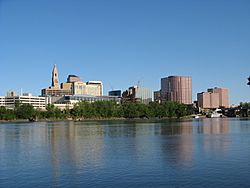 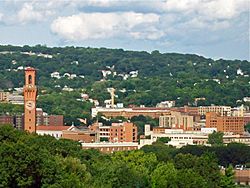 Towns in Connecticut are allowed to adopt a city form of government without the need to re-incorporate as a city. Connecticut state law also makes no distinction between a consolidated town/city and a regular town. Bolded city names indicate the state's largest cities, with the most populated being Bridgeport. Population is from 2010 United States Census where available. Windham and Tolland counties is the only counties in Connecticut currently without a single city in it.

All content from Kiddle encyclopedia articles (including the article images and facts) can be freely used under Attribution-ShareAlike license, unless stated otherwise. Cite this article:
List of cities in Connecticut Facts for Kids. Kiddle Encyclopedia.