Winsted is a census-designated place and an incorporated city in Litchfield County, Connecticut, United States. It is part of the town of Winchester. The population of Winsted was 7,712 at the 2010 census, out of 11,242 in the entire town of Winchester. 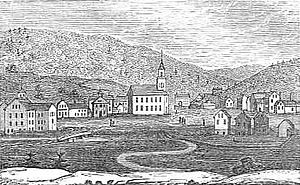 Winsted in 1836, a woodblock print drawn by John Warner Barber

Settled in 1750, the city of Winsted was formed at the junction of the Mad River and Still River, and was one of the first mill towns in Connecticut. Manufactured products started with scythes at the Winsted Manufacturing Company in 1792. The city is within the town of Winchester, and its name derives from the fact that it is the business center for the towns of Winchester and Barkhamsted.

Winsted, along with New Haven, Connecticut, was a center for the production of mechanical clocks in the 1900s. The Gilbert Clock Company, located along the Still River north of town, was founded in 1871 by William L. Gilbert (1806‑1890) and became one of the largest clock companies in the world around the start of the 20th century.

The Winsted post office contains an oil on canvas mural, Lincoln's Arbiter Settles the Winsted Post Office Controversy, painted by muralist Amy Jones in 1938. Federally commissioned murals were produced from 1934 to 1943 in the United States through the Section of Painting and Sculpture, later called the Section of Fine Arts, of the Treasury Department.

The Gilbert School is a private secondary school that serves as the public high school for the town of Winchester.

In 1955, Hurricane Connie and Hurricane Diane passed over Connecticut within one week, flooding the Mad River and Still River through downtown. The Mad River, which parallels Main Street, caused flooding up to 10 feet deep through the center of town. This damaged the buildings between Main Street and the river such that all buildings on that side of Main Street through the center of town were subsequently removed and Main Street widened to 4 lanes. The buildings on the north side of Main Street for the most part survived and were repaired. Further downstream, the Still River flowed between the buildings of the Gilbert Clock Company. The flooding caused extensive damage to their buildings, and this was the final blow to a company which was already in poor financial condition.

In 2013, Henry Centrella, the former city Finance Director, was served a complaint, which stated that over $2.2 million was misappropriated during his 30-year tenure.

According to the United States Census Bureau, the CDP has a total area of 4.8 square miles (12 km2), of which, 4.7 square miles (12 km2) of it is land and 0.2 square miles (0.52 km2) of it (3.31%) is water. Winsted is at the confluence of the Still River and Mad River. This Mad River is one of seven in New England, one other of which is also in CT. The city is laid out in a horseshoe-shaped valley ringed by seven hills; two other hills stand amid this, making a total of nine named hills. Formerly divided into East and West Winsted, the distinction (and local feuding) more or less died out over the decades, until today there is no memory of the division at all. There are five stone churches in a crescent from E-W, with the Soldier's Monument on Camp Hill in their exact center. Case Mt. runs south above the Still River to Burr Mt.

Public transportation service is provided by the Northwestern Connecticut Transit District, which operates a weekday bus service and a dial-a-ride service.

There is a charter school, Explorations Charter School.

There is also was a parochial Catholic school, St. Anthony School, of the Roman Catholic Diocese of Hartford. It opened in 1865. Circa 2008 it had about 200 students. By 2020 this figure declined to 90. It closed in 2020. At the time it was the oldest school continually operated by the archdiocese.

Beardsley Library and the Memorial Library is the local public library. Mrs. Eliot Beardsley donated $10,000 to establish the library. The buying of the land was funded by Jenison Whiting, who submitted a bequest in 1898, with the first building built the following year.

All content from Kiddle encyclopedia articles (including the article images and facts) can be freely used under Attribution-ShareAlike license, unless stated otherwise. Cite this article:
Winsted, Connecticut Facts for Kids. Kiddle Encyclopedia.