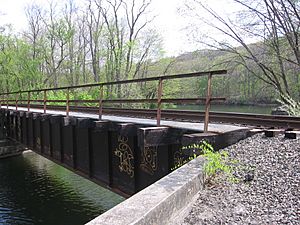 The Still River is a 25.4-mile-long (40.9 km) tributary to the Housatonic River in western Connecticut.

The Still River has a brief but impactful history that has influenced its condition today. The farming industry in Danbury led to extreme pollution in the river. Beginning around the 1860s, the river again experienced significant mercury pollution from the hatting industry that continued for several years. This pollution had both ecological and anthropogenic effects on the surrounding environment, eventually leading to a need for remediation and cleanup.

Even before the hatting industry began in the late 1700s, the Still River was known as a dead river. This was due to pollution from farms in the area surrounding Danbury, CT. Farmers used the river as a site to get rid of waste and other toxic debris. Historical documents from Danbury and surrounding towns cited the river as a sewage dump around the 1880s, and the water was unusable for both agricultural and industrial use. It wasn't until a court case ruling in 1895, along with the Clean Water Act in 1972 that the city of Danbury was required to take responsibility for the state of the river. In 1993, Danbury constructed a new sewage treatment plant to help improve water quality. In 2014, the Still River Partners was created with the hopes of rebuilding the watershed, and as of 2019, this group is still responsible for maintaining and improving the river.

Mercury nitrate was discharged to the river by the hatting industry from circa 1860 through the first half of the 1900s. The hat factories used the chemical in the felt making process to remove animal fur from pelts. During this time, levels of mercury were found to be 5-10 ppm with extremes up to 100 ppm. These levels were about 500 times higher than background levels. Although the hatting industry was the main cause of mercury pollution, there were other industries that contributed as well. The P. Robinson Fur Cutting Company was a fur removal company sited on the Still River.

During the peak of the hatting industry, mercury pollution transported via the river's current into the Housatonic River, and into the Long Island Sound.

The mercury pollution was detrimental to the river's life and the surrounding ecosystems, and didn't start to fully rebound until the construction of the sewage treatment plant. Many species of fish can now be found, and kayak ramps have been installed downriver from Danbury.

At least three organizations have an interest in preserving the Still River and its watershed. Spearheaded by Danbury's Health Department, the Still River Alliance was organized in 1995 as a consortium of three different groups. The Alliance developed a website (see external links below) which has not been updated for several years. Due to budget cuts, the driving force behind the Alliance, Jack Kozuchowski, retired and the Still River Alliance seems to have floundered since then. Mr. Kozuchowski is currently an environmental consultant. Coordinated by the Housatonic Valley Association and with funding from Connecticut Department of Energy and Environmental Protection, key stakeholders and municipalities formed the Still River Partners group and launched an EPA approved watershed planning process to improve the water quality of the Still River which is still active today.

All content from Kiddle encyclopedia articles (including the article images and facts) can be freely used under Attribution-ShareAlike license, unless stated otherwise. Cite this article:
Still River (Housatonic River tributary) Facts for Kids. Kiddle Encyclopedia.