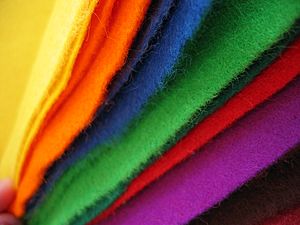 Samples of felt in different colours 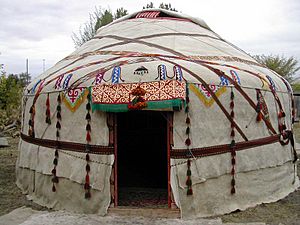 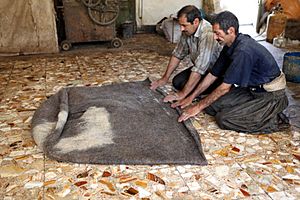 Felt is a type of cloth that is made by matting wool fibers, either with water and soap, or by poking the fibers with barbed needles. Felt can be made by hand, or by machine.

People have been making felt longer than any other kind of fabric. Felt can be of any color, and made into any shape or size. Felt is used to make many things like clothing, hats, and rugs. Nomadic people in many countries live in tents made of felt. Felt is used for many different things. Today people use felt for hat-making, insulating (making warm), sound-proofing, and cushioning.

The difference between felt and most fabrics, like denim, is that most fabrics have a regular criss-cross, in-and-out weaving pattern, but felt is a messy jumble of threads. Most fabrics are woven for strength and smoothness: they need carding to straighten the fibers, spinning to turn fibers into long threads and weaving to make fabric. Felt only needs a carding comb. Because of this, felt was often used by nomadic people. 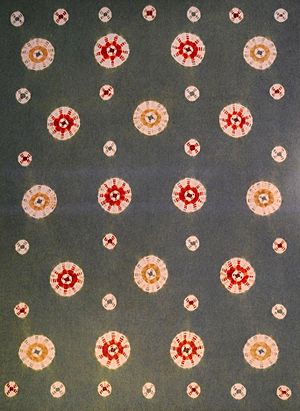 Felt is used in a wide range of industries and manufacturing processes, from the automotive industry and casinos to musical instruments and home construction.

Many musical instruments use felt. It is often used as a damper. On drum cymbal stands, it protects the cymbal from cracking and ensures a clean sound. It is used to wrap bass drum strikers and timpani mallets. Felt is used extensively in pianos; for example, piano hammers are made of wool felt around a wooden core. The density and springiness of the felt is a major part of what creates a piano's tone. As the felt becomes grooved and "packed" with use and age, the tone suffers. Felt is placed under the piano keys on accordions to control touch and key noise; it is also used on the pallets to silence notes not sounded by preventing air flow.

Felt is frequently used in industry as a sound or vibration damper, and in machinery for cushioning and padding moving parts.

Felt in arts and crafts 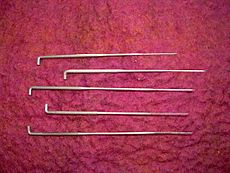 Felt is used for framing paintings. It is laid between the slip mount and picture as a protective measure to avoid damage from rubbing to the edge of the painting. This is commonly found as a preventive measure on paintings which have already been restored or professionally framed. It is widely used to protect paintings executed on various surfaces including canvas, wood panel and copper plate.

A felt-covered board can be used in storytelling to small children. Small felt cutouts or figures of animals, people, or other objects will adhere to a felt board, and in the process of telling the story, the storyteller also acts it out on the board with the animals or people. Puppets can also be made with felt. Felt pressed dolls, such as Lenci dolls, were very popular in the nineteenth century and just after the first world war.

Felt in art and design

German artist Josef Beuys used felt in a number of works and many more people. 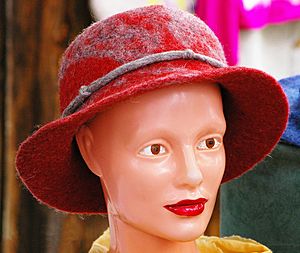 During the 18th and 19th centuries gentlemen's top hats made from beaver felt were popular. In the early part of the 20th century, cloth felt hats, such as fedoras, trilbies and homburgs, were worn by many men in the western world. Felt is often used in footwear as boot liners, with the Russian valenki being an example.

All content from Kiddle encyclopedia articles (including the article images and facts) can be freely used under Attribution-ShareAlike license, unless stated otherwise. Cite this article:
Felt Facts for Kids. Kiddle Encyclopedia.