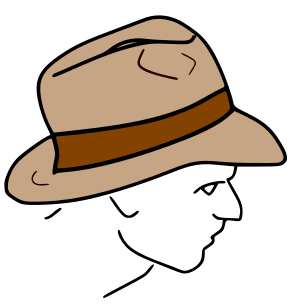 Drawing of a fedora 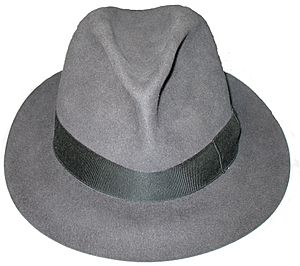 A fedora is a hat. The name of the hat comes from a play called Fédora by Victorien Sardou, named after the main character. Popular in the early 20th century, it has become a stereotype for gangsters or private investigators (PIs).

They mainly come in black, sometimes with a band of coloured fabric around the rim.

Some people, such as Jack Abramoff and Richard W. Lariviere, become known for wearing fedoras.

All content from Kiddle encyclopedia articles (including the article images and facts) can be freely used under Attribution-ShareAlike license, unless stated otherwise. Cite this article:
Fedora Facts for Kids. Kiddle Encyclopedia.