The Housatonic River ( HOOS-ə-TON-ik) is a river, approximately 149 miles (240 km) long, in western Massachusetts and western Connecticut in the United States. It flows south to southeast, and drains about 1,950 square miles (5,100 km2) of southwestern Connecticut into Long Island Sound. Its watershed is just to the west of the watershed of the lower Connecticut River.

Indigenous people began using the river area for fishing and hunting at least 6,000 years ago. By 1600, the inhabitants were mostly Mohicans and may have numbered 30,000.

The river's name is derived from the Mohican phrase "usi-a-di-en-uk", translated as "beyond the mountain place" or "river of the mountain place". It is referred to in the deed by which a group of twelve colonists called "The Proprietors" captured the land now called Sherman and New Fairfield as "Ousetonack". Samuel Orcutt, a 19th-century historian, explained the term's pronunciation as "more properly...Howsatunnuck" and also noted an early spelling in the form of "Oweantinock". Prior to the 18th century, the river was alternatively known as the Pootatuck River. Accounts differ on the origin of this name, with some claiming that Pootatuck is an Algonquian term translating to "river of the falls" while others relate the term was eponymous, reflecting the name of the tribe that had their principal village along the river in the area of Newtown, Connecticut. "Pootatuck River" eventually came to refer a lesser tributary in the Housatonic watershed which empties into the Housatonic River at Sandy Hook, Connecticut.

The river passes through land that was formerly occupied primarily by native people of Algonquian lineage, typically living in villages of two to three hundred families housed in hide wigwams. These native inhabitants burned the forests along the Housatonic Valley in the autumn to keep the underbrush down, a practice which was customary throughout Connecticut prior to European settlement. 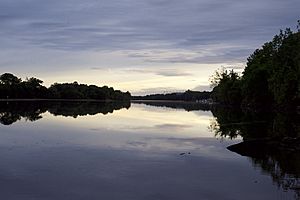 Housatonic river by Shelton at sunset.

One notable native was Chief Squantz of the Schaghticoke tribe, who still hold a portion of the former reservation on the west side of the Housatonic River, in what is now called the town of Kent.

English settlement of the northern Housatonic Valley began in 1725 in Sheffield, Massachusetts. By 1734, Mohicans established the Indian Town of Stockbridge, which grew over 15 years but then failed, with land pressures increasing.

The river has been a source of power for paper, iron, textiles, and electricity industries. At Great Barrington, a grist mill built by David Ingersoll in 1739 used the river for power. The paper industry grew using the river's power from circa 1800.

The river was dammed with the advent of industry. In 1900, there were 30 dams on the river in Pittsfield. Many have been removed, but many remain, such as the Woods Pond dam in Lenox, Columbia Mill dam in Lee, Willow Mill dam in South Lee, Glendale dam in Stockbridge, and Rising Pond dam in Great Barrington, Massachusetts.

Inspired by the river during his honeymoon, the American classical music composer Charles Ives wrote "The Housatonic at Stockbridge" as part of his composition Three Places in New England during the 1910s, drawing his text from a poem of the same name by Robert Underwood Johnson. The town of Stockbridge is located in southwestern Massachusetts. The river enters Stockbridge on the east side of town before turning south toward Connecticut.

There is an American nuclear weapon test of the same name, although it is not known if the name originated from the river or some other source.

The United States Navy named a ship for the Housatonic River. The USS Housatonic has the distinction of being the first ship in history to be sunk by a submarine, the Confederate vessel CSS H.L. Hunley. 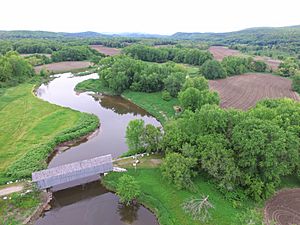 The Housatonic River at the Old Covered Bridge in Sheffield. The former Thom Reed UFO Monument Park is to the right of the bridge.

Three wooden covered bridges cross the Housatonic River. Two are in Connecticut: one known as Bull's Bridge, which spans the river between Gaylordsville and Kent, and another at Cornwall, known as the West Cornwall Covered Bridge. Reinforced with present-day materials, both bridges carry normal vehicle traffic, albeit in only one direction at a time. The third bridge, Old Covered Bridge located in Sheffield, Massachusetts, was destroyed by fire and rebuilt in 1998; it is now open only to foot traffic.

In 1969, nine-year old Thom Reed and his family claimed to see a bright light rise from the Housatonic River, then found themselves inside "what appeared to be an airplane hanger," where they saw creatures that "resembled large insects." Supporters of the family erected a memorial to the incident at the Old Covered Bridge in Sheffield, Massachusetts in 2015. The 5,000-pound memorial was removed by the town in 2019. The incident featured in a 2020 episode of Unsolved Mysteries on Netflix. 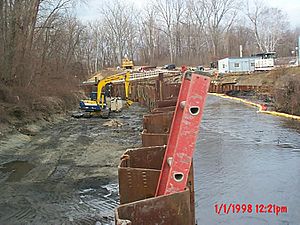 Cleanup activity at one of the GE Pittsfield plant Superfund sites.

From circa 1932 until 1977, the river received PCB pollution discharges from the General Electric (GE) plant at Pittsfield, Massachusetts. The U.S. Environmental Protection Agency (EPA) designated the Pittsfield plant and several miles of the Housatonic as a Superfund site in 1997, and ordered GE to remediate the site. EPA and GE began a cleanup of the area in 1999. Most of the PCBs used in the United States during this period were made by Monsanto. Aroclor 1254 and Aroclor 1260, made by Monsanto, was a primary contaminant of the pollution in the Housatonic River. Although the water quality has improved in recent decades, and some remediation has taken place, the river continues to be contaminated by PCBs.

As of 2020 GE has completed remediation and restoration of the 10 manufacturing plant areas within the city, and is conducting inspection, monitoring and maintenance activities. Additional remediation is planned for the downstream polluted areas of the river. The highest concentrations of PCBs in the Housatonic River are found in Woods Pond in Lenox, Massachusetts, just south of Pittsfield, where they have been measured up to 110 mg/kg in the sediment. About 50% of all the PCBs currently in the river are estimated to be retained in the sediment behind Woods Pond dam. This is estimated to be about 11,000 pounds of PCBs. Former filled oxbows are also polluted.

Birds, such as ducks, and fish that live in and around the river contain significant levels of PCBs and can present health risks if consumed.

Negotiations regarding how to clean up the contaminated areas south of Pittsfield had continued for many years since the initial Superfund site designations, involving GE, EPA, local governments, citizen groups and other stakeholders. In February 2020 EPA announced a settlement agreement involving GE, EPA and most of the concerned parties, to remove contaminated sediment from the river. Highly contaminated soil would be removed and shipped to federally-approved facilities outside the state, while less-contaminated soil would be placed in a new specially-designed landfill in Berkshire County. EPA's plan is subject to public comment and is expected to be finalized later in 2020.

The Connecticut segment of the river is polluted with mercury levels far beyond background levels, starting at the confluence with the Still River. The hat manufacturing industry of Danbury, Connecticut, which operated from the 19th to the mid-20th century, was the source of most of this mercury pollution, from mercury nitrate used in the felting process. In the 21st century, the mercury remains in the river sediment and flows downstream, especially during storm events. High mercury levels are measured in the sediment at the outflow delta of the Housatonic River into Long Island Sound. 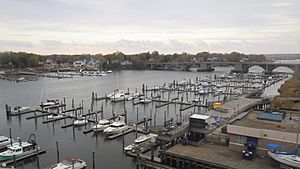 The Housatonic River watershed drains 1,948 square miles (5,050 km2) in western Connecticut and Massachusetts and eastern New York. The Housatonic rises from four sources in far western Massachusetts in the Berkshire Mountains near the city of Pittsfield. It flows southward through western Massachusetts through the Berkshires and into western Connecticut, and empties into the Long Island Sound between the cities of Stratford and Milford, forming a border between Connecticut's Fairfield County and New Haven County, respectively.

The river's total fall is 1,430 feet (440 m) (959 feet (292 m) from the confluence of its east and west branches) to Long Island Sound. Its major tributaries in Massachusetts are (heading downstream) the Williams River (in Great Barrington), Green River and Konkapot River (in Ashley Falls). Crossing south into Connecticut, the Housatonic's major tributaries are the Blackberry River (in Canaan), Salmon Creek (below Falls Village), Ten Mile River (above Gaylordsville but originating in New York), Still River (south of New Milford), Shepaug River (at the Bridgewater and Southbury border), Pomperaug River (at Southbury), and Naugatuck River (in Derby). The Naugatuck River is the Housatonic's largest tributary with a contributing watershed of 312 square miles (810 km2). 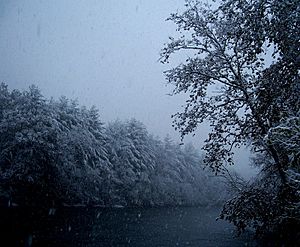 View of the "fly fishing and paddling" section of the river during a snowstorm. Surrounding forests are still wild and support animal life despite the threat of suburban encroachment.

The Housatonic River is a popular whitewater paddling destination beginning at Falls Village, Connecticut and continuing to Gaylordsville. Most of the river is quickwater and Class I whitewater with long sections of Class II-III whitewater. A deadly and extreme Class VI resides at Great Falls in Canaan (Falls Village) and is most likely not able to be paddled. The most dangerous and difficult section that is navigable is by Bulls Bridge, with Class V whitewater.

There are several minor and major dams along the river that form lakes. Most notable are two lakes in Connecticut, Lake Zoar, which borders Monroe, Newtown, Oxford, and Southbury, and Lake Lillinonah. Both lakes are major water-sport recreation outlets for the surrounding towns.

The Appalachian Trail follows the river along this section from the Bulls Bridge covered wooden bridge near Kent to Falls Village.

All content from Kiddle encyclopedia articles (including the article images and facts) can be freely used under Attribution-ShareAlike license, unless stated otherwise. Cite this article:
Housatonic River Facts for Kids. Kiddle Encyclopedia.