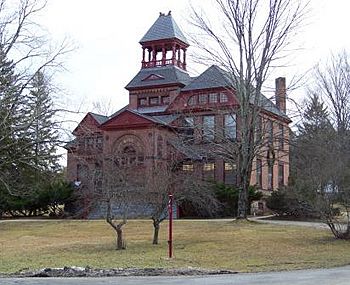 The Falls Village post office is assigned zip code 06031, which encompasses the entire town of Canaan. 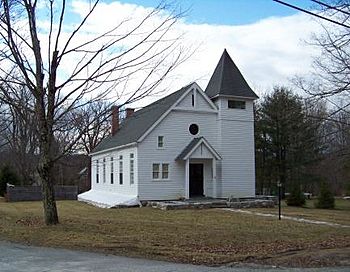 In 1979 the Falls Village District was listed on the National Register of Historic Places as an historic district. The district represents about 70 acres (280,000 m2) that were built in the middle of the 19th century as a result of the area being selected as a station stop for the Housatonic Railroad in the early 1830s. Newer buildings around the junction of U.S. Route 7 and Route 126 are excluded.

The historic district includes examples of Greek Revival, Italianate, and Queen Anne architecture. It includes 71 buildings and the canal built to harness water power from the Great Falls northwest of the village. The district is bounded on the south by the east-west portion of Railroad Street, on the east by the rear property lines of houses fronting Beebe Hill Road, on the north by the rear property lines of houses fronting Brewster Road, and on the west by the Housatonic Railroad tracks (with a bulge in the northwest to include the unused 1851 canal between Water Street and the railroad tracks).

Contributing properties in the historic district include the D. M. Hunt Library, built in 1891, and St. Patrick's Church.

All content from Kiddle encyclopedia articles (including the article images and facts) can be freely used under Attribution-ShareAlike license, unless stated otherwise. Cite this article:
Falls Village, Connecticut Facts for Kids. Kiddle Encyclopedia.