Salisbury is a town situated in Litchfield County, Connecticut, United States. The town is the northwesternmost in the state of Connecticut; the Massachusetts-New York-Connecticut tri-state marker is located at the northwest corner of the town. The population was 3,741 at the 2010 census.

Salisbury was established and incorporated in 1741, and contains several historic homes, though some were replaced by larger modern structures in the late 20th century. Salisbury was named for a town in England. Historian Ed Kirby tells us that traces of iron were discovered in what was to become Salisbury in 1728, with the discovery of the large deposit at Old Hill (later Ore Hill) in 1731 by John Pell and Ezekiel Ashley. Beginning before the Revolution, during the Federal period, and until around 1920, Salisbury was the seat of an important iron industry.

Additional iron mines were opened, mostly in the Western end of the township, although historian Diana Muir dismisses them as "scarcely big enough to notice," with the further disadvantage of not being near a river large enough to ship iron to market at a reasonable cost. The solution, according to Muir, was to pour labor into the iron, working it into a quality of wrought iron so high that it could be used even for gun barrels. This fetched a high price and made Salisbury iron the celebrated choice of Connecticut's early nineteenth-century arms industry as well as the preeminent source of cast iron railroad car wheels until they were superseded by steel wheels. Peter P. Everts, an agent of the mid-19th-century mines, however, stated the quality of Salisbury iron varied. The iron industry in Salisbury became inactive following World War I, a plan to revive it during World War II was never implemented, and the mines remain under water.

Scoville Library in Salisbury was the first in the United States open to the public free of charge. Salisbury is also home to the oldest Methodist Church in New England, The Lakeville Methodist Church, constructed in 1789.

According to the United States Census Bureau, the town has a total area of 60.1 square miles (155.6 km²), of which, 57.3 square miles (148.5 km²) of it is land and 2.8 square miles (7.1 km²) of it (4.59%) is water. Although the peak of Mount Frissell lies in Massachusetts at an elevation of 2,453 ft, the south slope of the mountain (2,380 ft) in Salisbury, is the highest point in Connecticut. Within Salisbury there are several ponds and six lakes: Wononscopomuc, Washinee, Washining, Wononpakook, Riga Lake and South Pond.

The town of Salisbury includes the villages of Salisbury and Lakeville, and the hamlets of Amesville, Lime Rock, and Taconic. Historically the areas of Joyceville, Ore Hill, Hammertown, Weatogue and Twin Lakes were recognized as separate communities but are no longer. 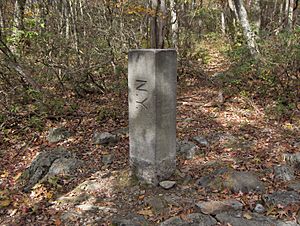 The Appalachian Trail runs through Salisbury. 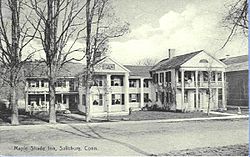 All content from Kiddle encyclopedia articles (including the article images and facts) can be freely used under Attribution-ShareAlike license, unless stated otherwise. Cite this article:
Salisbury, Connecticut Facts for Kids. Kiddle Encyclopedia.