Governor of Vermont facts for kids 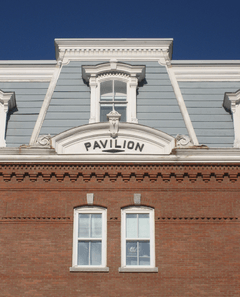 Detail of The Pavilion in Montpelier, location of the Governor of Vermont's working offices

The Governor of the U.S. state of Vermont is the head of the government of the state. The governor is elected in even-numbered years by direct voting for a term of two years. Vermont and bordering New Hampshire are now the only states to hold gubernatorial elections every two years, instead of every four as in the other 48 states. There is no limit on the number of terms a governor can serve. If no candidate receives at least 50 percent plus one vote of all votes for governor cast in the election, the governor is then elected by the state legislature.

The incumbent governor is Phil Scott. He was sworn in on Thursday January 5, 2017, becoming Vermont's 82nd Governor.

The governor's working offices are located in The Pavilion in the state capital of Montpelier, Vermont. The governor's ceremonial office, used during the legislative session of the General Assembly, is located in the Vermont State House, also in Montpelier.

The Constitution of Vermont details the powers of the governor:

All content from Kiddle encyclopedia articles (including the article images and facts) can be freely used under Attribution-ShareAlike license, unless stated otherwise. Cite this article:
Governor of Vermont Facts for Kids. Kiddle Encyclopedia.