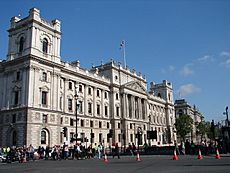 Treasury buildings: the offices of H.M. Treasury in Whitehall

A Treasury is either: 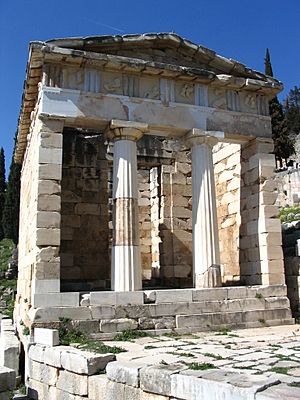 The treasury of Athens at Delphi, built with the spoils of the Battle of Marathon 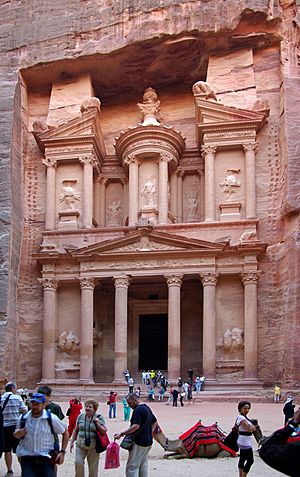 The treasury of Petra

The treasury as a place to keep the king's (or city's) gold and valuables has a long history. The winners in a war would take back whatever they wanted, and slaves and booty were top of the list. The first recorded booty in history is a stele taken during 1160 BC.

The earliest found artefacts made of silver and gold are from Lake Varna in Bulgaria dated 4250–4000 BC, the earliest made of copper are dated 9000–7000 BC.

"...And there was also silver weighing many thousands of talents and all the royal treasure amounting to a very great sum..." Procopius of Caesarea.

The term treasury was first used in classical antiquity to describe the places built for gifts to the gods. An example is the Siphnian Treasury in Delphi. Many similar buildings were put up in Olympia, Greece by city-states hoping to impress others during the ancient Olympic Games. In Ancient Greece treasuries were almost always inside religious buildings such as temples. This made state funds sacrosanct, and adding moral constraints to the punishment for thieves.

The sovereigns' treasury in the palace in ancient Jerusalem,was similar in nature to the temple treasury. Those treasuries had officials, and worked rather like a bank.

"...in fact, practically in every city there are banking places for the holy money..." Philo.

In excavations of Persopolis a text about to the activities of a treasury were discovered. It dates to the fifth century BC. The texts were written in the Elamite language.

The ancient Roman word aerarium signified the treasury of the Senate, fiscus was used to indicate the imperial treasury used by Caesar.

In the United Kingdom, Her Majesty's Treasury is overseen by the Chancellor of the Exchequer. The traditional honorary title of First Lord of the Treasury is held by the Prime Minister. Her Majesty's Revenue and Customs administers the taxation system.

In many other countries, the treasury is called the Ministry of Finance. Its head is known as the Finance Minister. Examples include New Zealand, Canada, Malaysia, Singapore, Bangladesh, India, Pakistan, and Japan.

In some other countries, a Treasury will co-exist with a separate Ministry of Finance, with divided functions.

All content from Kiddle encyclopedia articles (including the article images and facts) can be freely used under Attribution-ShareAlike license, unless stated otherwise. Cite this article:
Treasury Facts for Kids. Kiddle Encyclopedia.