Kids Encyclopedia Facts
For the Royal County of Berkshire in the United Kingdom, see Berkshire. 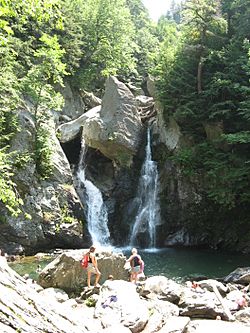 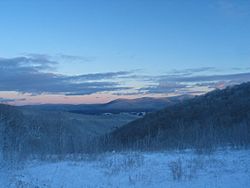 The Berkshire Hills, part of the Appalachian Mountains, in winter

Berkshire County, pronounced is a county located on the western edge of the U.S. state of Massachusetts. As of the 2010 census, the population was 131,219. Its largest city and traditional county seat is Pittsfield. The county was founded in 1761.

The Berkshire Hills are centered on Berkshire County, and the county itself is often referred to simply as the Berkshires. It exists today only as a historical geographic region, and has no county government.

Berkshire County is one of two Massachusetts counties that borders three different neighboring states; the other being Worcester County. The two counties are also the only ones to touch both the northern and southern state lines.

The Mahican (Muh-he-ka-neew) Native American tribe lived in the area that now makes up Berkshire County until the early 18th century, when the first English settlers and frontiersmen appeared and began setting up farms and homesteads. On April 25, 1724, “The English finally paid the Indians 460 pounds, 3 barrels of cider, and 30 quarts of rum for what is today Berkshire County.” This deal did not include modern Sheffield, Stockbridge, Richmond, and Lenox, which were added later. Berkshire County remained part of Hampshire County until 1760.

In the 19th century, Berkshire County became popular with the American elite, which built what they called "cottages" throughout the countryside. The Gilded Age ended in the early 20th century with the income tax, World War I, and the Great Depression. In the 20th, century some of these cottages were torn or burned down, while others became prep schools, historic sites, or bed-and-breakfast inns.

Today Berkshire is known throughout the East Coast and the country as the summer home of the Boston Symphony Orchestra. It includes attractions such as Tanglewood, the Norman Rockwell Museum, Mass MOCA, and Hancock Shaker Village. 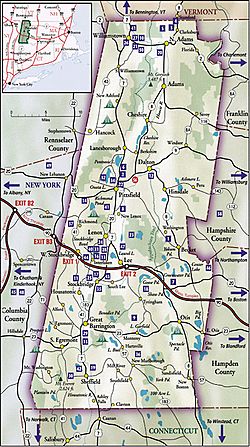 Villages and census-designated places are unincorporated communities that have no separate legal existence from the towns they are in.

All content from Kiddle encyclopedia articles (including the article images and facts) can be freely used under Attribution-ShareAlike license, unless stated otherwise. Cite this article:
Berkshire County, Massachusetts Facts for Kids. Kiddle Encyclopedia.