Becket is a town in Berkshire County, Massachusetts, United States. It is part of the Pittsfield, Massachusetts Metropolitan Statistical Area. The population was 1,779 at the 2010 census.

Becket was first settled in 1740 and was officially incorporated in 1765.

The original "Beckett" for which the town of Becket was named is an estate or "tithing" that once belonged to the Admiral Lord Barrington (the namesake of "Great Barrington, Massachusetts"). It is located in Shrivenham, formerly in Berkshire, England, about five miles east of the important railroad town of Swindon.

Sir Francis Bernard, the Royal Governor of Massachusetts in 1765, was a close friend of Lord Barrington and was himself a native of Berkshire, England. It is said that he often went on holiday in the beautiful surroundings of Beckett, and that these pleasant memories influenced him in 1765 to give the name Becket to Township Number Four when he approved its incorporation.

In 1811, 16 men from Becket traveled to the Western Reserve and founded the village of Windham, Ohio.

The early town was the site of an experiment in the late eighteenth century involving the local church. Seeing the problems involved with communities who supported congregational churches, the town established its own church society, where local citizens supported the church without any tax monies. It was one of the first frontier communities to employ this model of supporting churches.

From its earliest days, Becket was involved in the woodland industries of lumber and quarries. As time went on, dairy production, basketry and silk also were products of the town. After a flood in the early twentieth century, most of the industries died out, and today Becket is mostly known as a resort town with an artists' community surrounding the Jacob's Pillow Company.

According to the United States Census Bureau, the town has a total area of 47.8 square miles (123.8 km2), of which 46.1 square miles (119.3 km2) is land and 1.7 square miles (4.5 km2), or 3.62%, is water. Becket is located on the eastern border of Berkshire County, at the junction of Hampshire County and Hampden County. Becket is bordered by Washington to the northwest, Middlefield to the northeast, Chester to the east, Blandford to the southeast, Otis to the south, and Tyringham and Lee to the west. Becket is 17 miles (27 km) southeast of Pittsfield, 32 miles (51 km) northwest of Springfield, and 118 miles (190 km) west of Boston.

Becket is located in the southern Berkshire Mountains, and is dotted with hills on the interior, and surrounded on two sides by Becket Mountain and Walling Mountain to the west, and Mount Gobble to the east. The west branch of the Westfield River flows along much of the Middlefield town line, flowing eastward towards Chester. Several marshy brooks flow through the town, and there are several ponds, lakes and the Palmer Brook Reservoir. Along the river, a small portion of the Walnut Hill Wildlife Management Area lies within the town, and to the west, the southeastern corner of October Mountain State Forest. The Appalachian Trail passes through the western part of town, circumventing the town of Lee while heading from Tyringham to Washington over Becket Mountain. 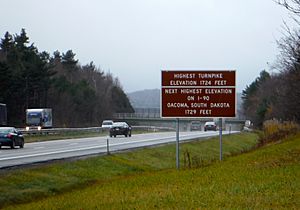 This sign for westbound traffic is located in Becket, Massachusetts; however Oacoma, South Dakota hasn't reciprocated this notable feature of Interstate 90 with a similar sign for eastbound traffic.

Interstate 90, the Massachusetts Turnpike, passes through town, with the nearest exit (Exit 2) being in neighboring Lee. The town also lies along U.S. Route 20, which is the main east-west route through the town. Massachusetts Route 8 runs concurrently with U.S. 20 for 5 miles (8 km) starting at the center of town, with the majority of the town's population residing around Robin Hood Lake south of this stretch. A portion of the CSX Berkshire Subdivision rail line passes along the river valley, providing access between Pittsfield and Springfield. The nearest rail, bus and regional air service can be found in Pittsfield, with the nearest national air service coming from Bradley International Airport in Windsor Locks, Connecticut.

There were 692 households out of which 30.9% had children under the age of 18 living with them, 61.7% were married couples living together, 6.5% had a female householder with no husband present, and 27.0% were non-families. 22.0% of all households were made up of individuals and 7.7% had someone living alone who was 65 years of age or older. The average household size was 2.50 and the average family size was 2.92.

All content from Kiddle encyclopedia articles (including the article images and facts) can be freely used under Attribution-ShareAlike license, unless stated otherwise. Cite this article:
Becket, Massachusetts Facts for Kids. Kiddle Encyclopedia.