The Mahican Indians called the area Mahaiwe, meaning "the place downstream". It lay on the New England Path, which connected Fort Orange near Albany, New York, with Springfield and Massachusetts Bay.

On April 25, 1724 Captain John Ashley of Westfield, Massachusetts bought on behalf of himself and a committee of the Massachusetts General Court the land that became the towns of Great Barrington, Sheffield, Egremont, Alford, Mount Washington, and Boston Corner for £460, three barrels of "sider," and thirty quarts of rum from 21 Native American sachems headed by Conkepot Poneyote. The Konkapot River in southwestern Massachusetts is named after him.

The village was first settled by colonists in 1726 and from 1742–1761 was the north parish of Sheffield. In 1761, it was officially incorporated as Great Barrington, named after the village of Great Barrington in Gloucestershire, England.

In the summer of 1774, 1,500 men shut down the Berkshire County Court in response to British oppression. In the winter of 1776, Henry Knox passed through Great Barrington while transporting the cannon from Fort Ticonderoga to the Siege of Boston. Due to his time in the area, he established an agricultural interest in the area of Great Barrington.

With the arrival of the railroad in the late 19th century, Great Barrington developed as a Gilded Age resort community for those seeking relief from the heat and pollution of cities. Wealthy families built grand homes called Berkshire Cottages here, as others would in Lenox and Stockbridge. Among the earliest estates was that built by New York City banker, industrialist and art patron David Leavitt, who built an elaborate 300-acre (1.2 km2) estate, and was soon followed by those of his sons nearby. Leavitt was instrumental in the development of the local Housatonic Railroad, serving as its president.

Later estates included Searles Castle, commissioned in 1888 by the widow of Mark Hopkins together with her second husband, Edward Francis Searles, and "Brookside", built for William Hall Walker. In 1895, Colonel William L. Brown, part owner of the New York Daily News, presented Great Barrington with a statue of a newsboy, now a landmark on the western edge of town.

Great Barrington is the birthplace of W. E. B. Du Bois, an African-American academic and civil rights activist, most known for being one of the co-founders of the National Association for the Advancement of Colored People (NAACP) in 1909. Du Bois was born on February 23, 1868, at a house later replaced by where present-day Route 23 would run. As a child, Du Bois attended the Congregational Church. Many of these church members donated the funds needed for Du Bois to attend college. Du Bois lived in the town until he was seventeen. The W.E.B. Du Bois Boyhood Homesite has interpretive trails and a walking tour. 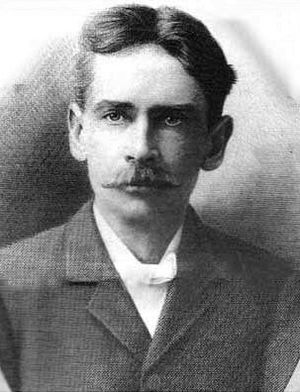 In November 1885 electrical engineer William Stanley, Jr., a sometimes Great Barrington resident working for George Westinghouse, began installing a demonstration transformer based alternating current lighting system, an improvement over the direct current system being used by Thomas Edison that Stanley was trying to get Westinghouse to adopt. Stanley had developed a series transformer that he thought would make AC practical. He built his components at the 'Old Rubber Factory" south of Cottage Street and installed a Westinghouse steam engine powering a 500 volt Siemens generator. Stringing the power lines from tree to tree down the street, in March 1886 Stanley powered the system up and was able to expand it to the point where it could light 23 businesses along Main Street with very little power loss over 4000 feet. The system's 500 AC volt current was stepped down to 100 volts using the new Stanley transformer to power incandescent lamps at each location. This was the world's first practical demonstration of a transformer/alternating current system and the basis of the AC systems that Westinghouse would begin installing later that year.

Arlo Guthrie's song "Alice's Restaurant," which runs for 18½ minutes, is based on true-life events of the late-20th century in Great Barrington and the adjoining towns of Stockbridge and Lee. The Old Trinity Church, which was the home of Ray and Alice Brock at the time of these incidents, and is now owned by Guthrie, is at 4 Van Deusenville Road in Great Barrington. 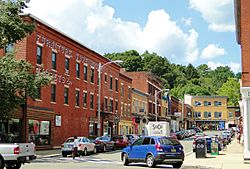 Railroad Street, where many popular restaurants and business are located

On October 18, 1990, Richard Stanley purchased the old Miller Hotel, also known as the Barrington House. Stanley started to upgrade the building. He removed the 1960s aluminum facade and returned the historic building through renovation to its 1929 appearance.

The town was the site of an F4 tornado around 7:00 PM on Memorial Day, May 29, 1995. The tornado killed three people and caused damage in the area.

On November 15, 1995, Richard Stanley and Joseph Wasserman opened The Triplex Cinema in the heart of Great Barrington. This contributed to further developments in the town, changing the economy and enhancing its desirability by providing a place for community events. With increased appeal as a destination, the town attracted new restaurants and retail shops, which opened on both Main Street and Railroad Street. Both streets previously had many vacant shops. The Berkshire Eagle reported that Great Barrington had 50 places to eat in a town of 7,700 people. 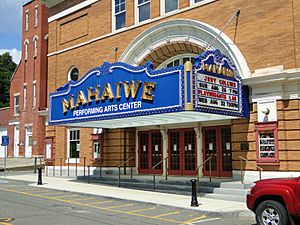 On June 1, 2010, a new fire station was opened for the Great Barrington Fire Department, located on Route 7. The new fire station replaced the old one, located on Castle Street. It had deteriorated and was too small for the growing needs of the fire department. The new $9.1 million facility was planned as a center for community events such as elections. It serves as the hub for emergency operations in southern Berkshire County.

The "Main Street Reconstruction Project" was launched in 2011, involving major improvements along Main Street between Saint James Place and Cottage Street. The plan elements include new pavement, new sidewalks, sewer and utility improvements, and the removal of the large trees that span Main Street, to be replaced with a much wider array of trees of varying sizes and growth habits.<http://theberkshireedge.com/part-ii-great-barringtons-main-street-remarkable-trees/> The project had finished its design phase as of 2012, and construction was to be completed in 2016.

Great Barrington is located within the valley of the Housatonic River. The Williams River, Green River and several brooks also flow through the valley into the Housatonic. To the east of the river, several mountains of the Berkshires rise, including East Mountain (site of the Ski Butternut resort (also known as Butternut Basin) and a state forest), Beartown Mountain (and the majority of Beartown State Forest) and Monument Mountain. The Appalachian Trail crosses through East Mountain State Forest in the southeast corner of town. The southwest corner of town is the site of several country clubs and a fairgrounds. 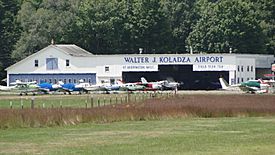 Great Barrington is the location of the Ski Butternut resort and the Berkshire Humane Society operates animal welfare services and pet adoption facilities in the town.

Great Barrington is the location of the Ski Butternut resort. The Berkshire Humane Society operates animal welfare services and pet adoption facilities in the town. 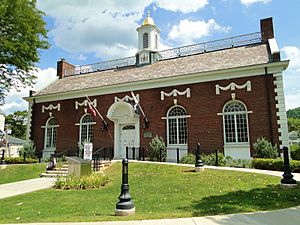 Great Barrington is the largest town in the Berkshire Hills Regional School District, which includes the towns of Stockbridge and West Stockbridge, and the villages of Housatonic, Glendale and Interlaken. All three school levels are in Great Barrington. Muddy Brook Regional Elementary School offers pre-kindergarten through fourth grade classes and is off Route 7 in the northern part of town. Monument Valley Regional Middle School offers grades five through eight. Monument Mountain Regional High School (MMRHS) opened in 1968, consolidating the former Searles High School in Great Barrington and Williams High School in Stockbridge, and serves the high school students of the district. Students from Otis and Sandisfield also attend the school as part of a tuition agreement for high schools.

The town of Richmond maintains an agreement with the district that gives its high school students an option to attend MMRHS. The school's athletic teams are called the Spartans, and their colors are maroon and white. Sports are offered at the junior varsity and varsity level for the students to participate in, including football, soccer, baseball and softball, swimming, track and field, tennis, fencing, and cross country running. The Spartans enjoy rivalries with, among other schools, the Lee High School Wildcats, in Lee, Massachusetts and the Lenox Memorial High School Millionaires in Lenox, Massachusetts.

The town is home to several private schools, including the Rudolf Steiner School, the Great Barrington Waldorf High School, and the John Dewey Academy.

Great Barrington is home to Bard College at Simon's Rock, which was the first-ever early college, and remains the only accredited four-year early college program in the country. Also here is the South County Center of the Berkshire Community College. The nearest state university is Westfield State University.

Great Barrington plays host to the American Institute for Economic Research. AIER was founded in 1933 as a non-profit scientific and educational organization. Originally at MIT, it relocated to the southern shore of Great Barrington's Long Pond in 1946. In October 2020 the Institute held a meeting of epidemiologists, economists and journalists to discuss government responses to the COVID-19 pandemic. The result was the Great Barrington Declaration, signed at the Institute's headquarters on October 4, 2020, and released to the public the following day, which advocated an alternative, risk-based approach to the pandemic involving "focused protection" of those most at risk and seeking to avoid or minimize the societal harm of lockdowns. 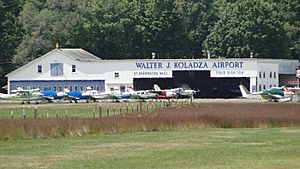 All content from Kiddle encyclopedia articles (including the article images and facts) can be freely used under Attribution-ShareAlike license, unless stated otherwise. Cite this article:
Great Barrington, Massachusetts Facts for Kids. Kiddle Encyclopedia.