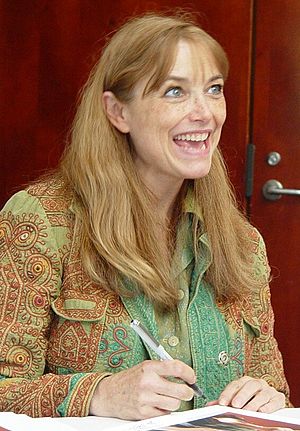 Karen Allen (born October 5 1951 in Carrollton, Illinois) is a theatre and movie actress. Mainly a stage actress, she started by playing small parts in movies. She is best known as Marion Ravenwood in Raiders of the Lost Ark (1981). Allen also costarred in the sequel Indiana Jones and the Kingdom of the Crystal Skull (2008).

All content from Kiddle encyclopedia articles (including the article images and facts) can be freely used under Attribution-ShareAlike license, unless stated otherwise. Cite this article:
Karen Allen Facts for Kids. Kiddle Encyclopedia.