The character is distinguished by his appearance (bullwhip, fedora, satchel and leather jacket), sense of humor, deep knowledge of many ancient civilizations and languages, and fear of snakes.

Since his first appearance in Raiders of the Lost Ark, Indiana Jones has become one of cinema's most famous characters. In 2003, the American Film Institute ranked him the second greatest film hero of all time. He was also named the 1st Greatest Movie Character by Empire magazine. Entertainment Weekly ranked Indy 2nd on their list of The All-Time Coolest Heroes in Pop Culture. Premiere magazine also placed Indy at number 7 on their list of The 100 Greatest Movie Characters of All Time.

A native of Princeton, New Jersey, Indiana Jones was introduced as a tenured professor of archeology in the 1981 film Raiders of the Lost Ark, set in 1936. The character is an adventurer reminiscent of the 1930s film serial treasure hunters and pulp action heroes, whose research is funded by Marshall College (named after producer Frank Marshall), a fictional college in Connecticut, where he is a professor of archaeology. He also attended the University of Chicago.

In this first adventure, he is pitted against the Nazis, who are commissioned by Hitler to recover evidence related to Aryan roots of Nazism. (see Nazi archaeology). In consequence, Dr Jones travels the world to prevent them from recovering the Ark of the Covenant (see also Biblical archaeology). He is aided by Marion Ravenwood and Sallah. The Nazis are led by Jones's archrival, a Nazi-sympathizing French archaeologist named René Belloq, and Arnold Toht, a sinister Gestapo agent.

In the 1984 prequel, Indiana Jones and the Temple of Doom, set in 1935, Jones travels to India and attempts to free enslaved children and the three Sankara stones from the bloodthirsty Thuggee cult. He is aided by Short Round, a young boy, and is accompanied by singer Willie Scott (Kate Capshaw).

The third film, 1989's Indiana Jones and the Last Crusade, set in 1938, returned to the formula of the original, reintroducing characters such as Sallah and Marcus Brody, a scene from Professor Jones's classroom (he now teaches at Barnett College), the globe trotting element of multiple locations, and the return of the infamous Nazi mystics, this time trying to find the Holy Grail. The film's introduction, set in 1912, provided some back story to the character, specifically the origin of his fear of snakes, his use of a bullwhip, the scar on his chin, and his hat; the film's epilogue also reveals that "Indiana" is not Jones's first name, but a nickname he took from the family dog. The film was a buddy movie of sorts, teaming Jones with his father, often to comical effect. Although Lucas intended to make five Indiana Jones films, Indiana Jones and the Last Crusade was the last for over eighteen years, as he could not think of a good plot element to drive the next installment. 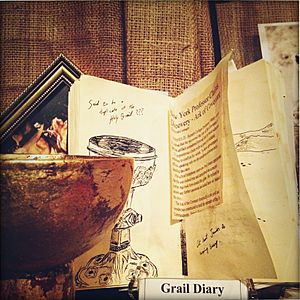 The 2008 film, Indiana Jones and the Kingdom of the Crystal Skull, is the latest film in the series. Set in 1957, 19 years after the third film, it pits an older, wiser Indiana Jones against Soviet agents bent on harnessing the power of an extraterrestrial device discovered in South America. Jones is aided in his adventure by his former lover, Marion Ravenwood (Karen Allen), and her son—a young greaser named Henry "Mutt" Williams (Shia LaBeouf), later revealed to be Jones' unknown child. There were rumors that Harrison Ford will not return for any future installments and LaBeouf will take over the Indy franchise. This film also reveals that Jones was recruited by the Office of Strategic Services during World War II, attaining the rank of Colonel in the United States Army. He is tasked with conducting covert operations with MI6 agent George McHale against the Soviet Union.

In March 2016, Disney announced a fifth Indiana Jones film currently in development, with Ford and Spielberg set to return to the franchise. The film will be released on July 10, 2020. 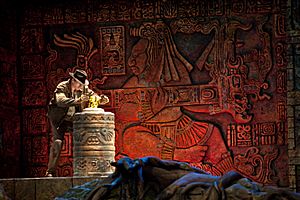 Indiana Jones as he appears at Disney theme parks

Indiana Jones is featured at several Walt Disney theme park attractions. The Indiana Jones Adventure attractions at Disneyland and Tokyo DisneySea ("Temple of the Forbidden Eye" and "Temple of the Crystal Skull," respectively) place Indy at the forefront of two similar archaeological discoveries. These two temples each contain a wrathful deity who threatens the guests who ride through in World War II troop transports. The attractions, some of the most expensive of their kind at the time, opened in 1995 and 2001, respectively, with sole design credit attributed to Walt Disney Imagineering.

The Indiana Jones Epic Stunt Spectacular! is a live show that has been presented in the Disney's Hollywood Studios theme park of the Walt Disney World Resort with few changes since the park's 1989 opening, as Disney-MGM Studios. The 25-minute show presents various stunts framed in the context of a feature film production, and recruits members of the audience to participate in the show.

Stunt artists in the show re-create and ultimately reveal some of the secrets of the stunts of the Raiders of the Lost Ark films, including the well-known "running-from-the-boulder" scene. Also at Disney's Hollywood Studios, an audio-animatronic Indiana Jones appears in another attraction; during The Great Movie Ride's Raiders of the Lost Ark segment. 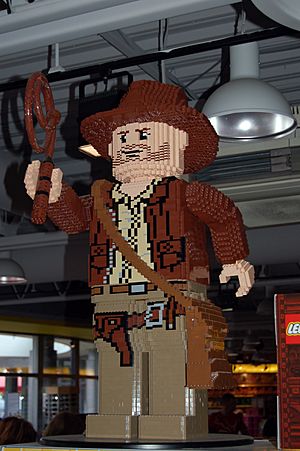 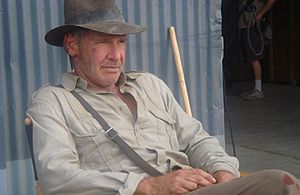 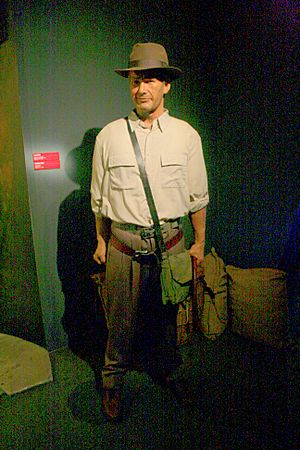 "Indiana" Jones's full name is Dr. Henry Walton Jones Jr., and his nickname is often shortened to "Indy". In his role as a college professor of archaeology, Jones is scholarly and learned in a tweed suit, lecturing on ancient civilizations. At the opportunity to recover important artifacts, Dr. Jones transforms into "Indiana," a "non-superhero superhero" image he has concocted for himself. Producer Frank Marshall said, "Indy [is] a fallible character. He makes mistakes and gets hurt. ... That's the other thing people like: He's a real character, not a character with superpowers."

One of the possible bases for Indiana Jones is Professor Challenger, created by Sir Arthur Conan Doyle in 1912 for his novel, The Lost World. Challenger was based on Doyle's physiology professor, Sir William Rutherford, an adventuring academic, albeit a zoologist/anthropologist.

The industry magazine Archaeology named eight past and present archaeologists who they felt "embodied [Jones'] spirit" as recipients of the Indy Spirit Awards in 2008. That same year Ford himself was elected to the Board of Directors for the Archaeological Institute of America. Commenting that "understanding the past can only help us in dealing with the present and the future," Ford was praised by the association's president for his character's "significant role in stimulating the public's interest in archaeological exploration."

He is perhaps the most influential character in films that explore archaeology. Since the release of Raiders of the Lost Ark in 1981, the very idea of archaeology and archaeologists has fundamentally shifted. Prior to the film's release, the stereotypical image of an archaeologist was that of an older, lacklustre professor type. In the early years of films involving archaeologists, they were portrayed as victims who would need to be rescued by a more masculine or heroic figure. Following 1981, the stereotypical archaeologist is thought of as a male bull whip wielding adventurer and Ivy League professor.

Indiana Jones is essentially the archetype for the field of archaeology, individuals who are actively involved in this field are influenced by the ideas put forward in the films and any other associated media. Indiana Jones is still a highly debated topic among archaeologists, whether the influence of these films is positive or negative has yet to be determined.

All content from Kiddle encyclopedia articles (including the article images and facts) can be freely used under Attribution-ShareAlike license, unless stated otherwise. Cite this article:
Indiana Jones Facts for Kids. Kiddle Encyclopedia.