Ark of the Covenant facts for kids 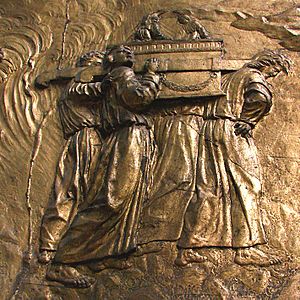 Transporting the Ark of the Covenant: gilded bas-relief at the Auch Cathedral 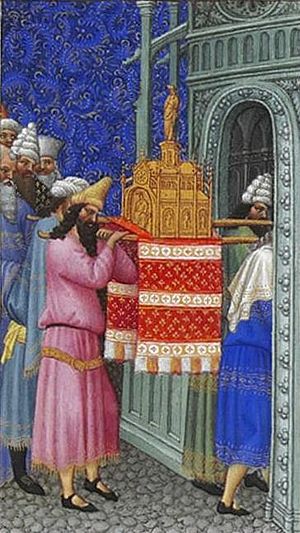 The Ark carried into the Temple

The Ark of the Covenant (ארון הברית in Hebrew: aron hab'rit) is described in the Bible as a holy container where the Ten Commandments and other holy Israelite objects are held. According to the Bible, Yahweh commanded the ark be built when Moses had a prophetic vision at Sinai (Exodus 25:9-10). Some people believe the Ark contained Aaron's Rod, a jar of Manna, and the first Torah Scroll written by Moses, based on their reading of Book of Exodus, Book of Numbers, and the Letter to the Hebrews. The first of the Books of Kings says that during the time of King Solomon, the Ark held only the Ten Commandments.

The Hebrew word aron is used in the Bible to designate any type of ark or chest, for any purpose (Genesis 50:26; 2 Kings 12:9, 10). The Ark of the Covenant is distinguished from all others by such titles as "Ark of God" (1 Samuel 3:3), "Ark of the Covenant" (Josh. 3:6; Hebrews 9:4), "Ark of the Testimony" (Ex. 25:22). The Ark (aron kodesh in Hebrew meaning holy cupboard) is a raised cupboard found in Jewish Synagogues which contains the holy Torah scrolls. These are all written by hand and can take years to make. It is always on the wall of the Synagogue which faces towards Jerusalem. When the Ark is opened and the Torah removed for reading everyone stands in respect of God. During some prayers and services the Ark doors an inner curtain (parochet) are kept open.

All content from Kiddle encyclopedia articles (including the article images and facts) can be freely used under Attribution-ShareAlike license, unless stated otherwise. Cite this article:
Ark of the Covenant Facts for Kids. Kiddle Encyclopedia.