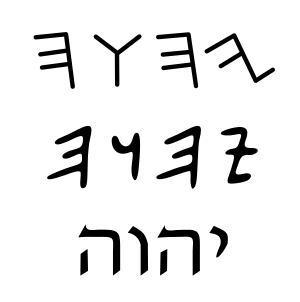 It has also been pronounced as "Yehova" in Hebrew as a substitute word for the tetragrammaton. This is because Hebrew pointing, or vowel symbols, are often put under the YHWH, making יְהֹוָה. The vowels used come from the Hebrew word for Lord, "Adonai", which after the last captivity, was substituted and the vowels of "Adonai" forced into the tetragrammaton,incorrectly spelling God's Hebrew name as "YaHoVaH". It was never meant to be anything more than a substitute to avoid pronouncing the tetragrammaton.

Today, the three Abrahamic religions (Judaism, Christianity and Islam) say that there is only one God, defined in the Judeo/Christian Scriptures as Yahweh almost 7,000 times, with the general name "Elohim" a distant second at 2,500 times. Yahweh was spoken often by Jews. In the New Testament, Yahweh is also present with the expanded name of Yahshua (Jesus), meaning "Yahweh(Yah) Saves(shua).

The Hebrew languages has no vowels as was used in Latin or eventually, English. Therefore, the Tetragrammaton, translated from Hebrew to Latin was JHWH. Eventually, it was JHVH in English. Since it does not contain vowels, as does English, vowels were inserted to make the name pronounable. Therefore JHVH became JEHOVAH.

The name Jehovah is used by the religious organisation of Jehovah's Witnesses based on early English Bible translations repeated by the KJV. They are not the only religious group to pronounce the holy name as Jehovah. When settlers of different religions arrived to settle lands in North America, the name Jehovah was widely used. It is still used by several regions besides Jehovah’s Witnesses.

In 2008, the "Vatican" reiterated a directive that the full name YAHWEH should not be used in Catholic liturgy out of respect for the Jews who never pronounce the full word and YHWH was to be used instead.