God in Christianity facts for kids 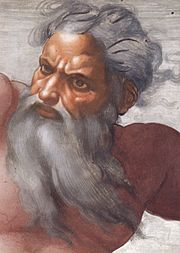 A drawing of God by Michelangelo c. 1510

In Christianity, one way people think of God is as a being that made everything and lives forever. The Christian Bible speaks of God as one who is, who speaks, who sees, hears, acts, and loves. Christians believe that God has a will and is a kind, all powerful being.

Some Christians believe God to be immanent (with and inside all things). Others believe he will be immanent later. Most believe he is also transcendent (outside space and time, so he is unable to be changed by forces inside the universe).

In the Bible, God has the personal name Yahweh (or YHWH).

God is not seen often by people in the Bible.

All content from Kiddle encyclopedia articles (including the article images and facts) can be freely used under Attribution-ShareAlike license, unless stated otherwise. Cite this article:
God in Christianity Facts for Kids. Kiddle Encyclopedia.