Basilica of St. Louis, King of France facts for kids

The Basilica of Saint Louis, King of France (French: Cathédrale Saint-Louis-Roi-de-France de Saint-Louis), formerly the Cathedral of Saint Louis, and colloquially the Old Cathedral, was the first cathedral west of the Mississippi River and until 1845 the only parish church in the city of St. Louis, Missouri. It is one of two Catholic basilicas in St. Louis, and it is named for King Louis IX of France, also the namesake for the city of St. Louis.

The current structure (built 1831-1834) is located near the historic riverfront of St. Louis. It is surrounded by Gateway Arch National Park. However, the church is not part of the park. Because of the historical significance of the church, it was left intact while all neighboring buildings were demolished to make way for the Gateway Arch. Rev. Nicholas Smith serves as Rector.

The basilica currently serves as a personal parish church rather than a territorial parish church, and therefore ranks 177th of 196 churches in number of Catholics per church in the Archdiocese of St. Louis. However, because of its historical significance (and its location along the Mississippi River near the iconic Arch), the basilica remains a popular church for marriage ceremonies in the archdiocese (ranking second of 196 churches) and a popular tourist destination.

The first Catholic church in St. Louis, built in 1770, and replaced by the current structure

When Pierre Laclède and Auguste Chouteau established the city of St. Louis, they dedicated a plot of land west of Laclède's home for the purposes of the Catholic Church. The earliest Catholic records suggest that a tent was used by an itinerant priest in 1766, but by 1770 a small log house was built on the site. This building, consecrated by the Reverend Pierre Gibault, an itinerant priest, on June 24, 1770, was expanded in 1776 to include a log church. In spite of a more substantial structure, no priest permanently resided in the village of St. Louis until 1811.

These buildings began to be replaced in 1818 with a brick structure, on the orders of the Bishop Louis William Valentine Dubourg. The brick structure was designed by Gabriel Paul, and it was during Dubourg's tenure as bishop that many artifacts, paintings, and an organ were donated to the church. While the brick church was under construction, a cemetery was established near the building, in which many of the founders of St. Louis were interred. Most of the bodies were reinterred during the 1840s and 1850s to Bellefontaine Cemetery, after the construction of the current church. Additionally, Dubourg was influential in the establishment of St. Louis Academy (later Saint Louis University) in a two-story brick building adjacent to the new church in 1818. However, construction on the brick church was not complete until 1821.

In 1826, growth prompted the establishment of the Diocese of St. Louis. Population growth also prompted the first bishop of the St. Louis diocese, Joseph Rosati, to begin construction on a new cathedral, now the Basilica of St. Louis, King of France. The cornerstone of the church was laid by Rosati during a ceremony on August 1, 1831. The church was designed and built by the architectural firm of Laveille and Morton, among the first architectural firms west of the Mississippi River above New Orleans. Construction was complete by late 1834, and on October 26, 1834, the cathedral was consecrated at a ceremony involving the local militia and parishioners. 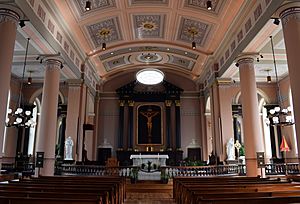 After the elevation of the Diocese of St. Louis to archdiocese status in 1847, the cathedral became home to an early chapter of the Society of Saint Vincent de Paul, a Catholic charity for the indigent. Both Archbishop Peter Richard Kenrick and St. Louis Mayor Bryan Mullanphy were counted among the founders of the chapter, initially dedicated to assisting immigrants but later expanding to all St. Louis residents. The tradition of care for the poor and needy was carried on in the early 20th century after the appointment of the Reverend John Tannrath to head the church on September 5, 1915. Tannrath not only refurbished the rectory and church, but also reestablished a parish school for local immigrant children and cared for disabled children and adults.

Again due to the growth of the city, a larger church was consecrated in 1914 farther west of the current church, in the city's Central West End neighborhood. This larger church, the Cathedral Basilica of Saint Louis, continues to serve as the seat of the archbishop of St. Louis. However, to recognize the original cathedral's significance, on January 27, 1961, Pope John XXIII designated it a basilica, giving it the present name, the Basilica of Saint Louis, King of France. Shortly after, in 1963, a renovation of the church occurred under the prominent St. Louis architectural firm Murphy and Mackey.

In 2015, the Basilica underwent a restoration, including: 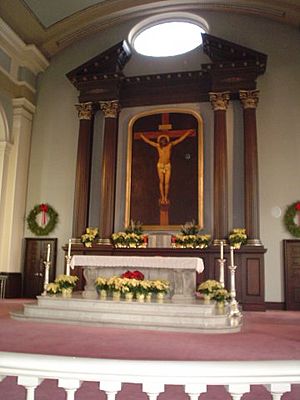 Main altar in marble with copy of Diego Velazquez's The Crucifixion

The current parish serves the needs of local parishioners, described as "few in number but strong in loyalty", along with working people and tourists. However, because of its location along the Mississippi River and near the Gateway Arch (which provide backdrops for wedding photos) the church is often used for weddings, only ranking behind St. Francis Xavier College Church at Saint Louis University in the number of Catholic marriages in the archdiocese. 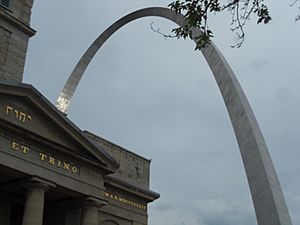 Built in Greek Revival style, the church is noted for its marble altars, a painting of Saint Louis venerating the Crown of Thorns given by Louis XVIII, King of France and Navarre, and an accurate copy of the painting of the Crucifixion by Diego Velázquez installed in the church in the latter half of the twentieth century.

Engraved in gold over the entrance to the church are the words In honorem s. Ludovici. Deo uni et trino dicatum. A. MDCCCXXXIV, which translates as "In honor of St. Louis. Dedicated to the one and triune God. A.D. 1834". Hebrew letters, intended to spell out the Tetragrammaton, are also inscribed in Hebrew above the engraving on the main entrance. However the letter Heth was substituted for the letter He, so the inscription merely reads "yachuch", which has no meaning in Hebrew.

The church basement has a number of artifacts associated with the history of the Roman Catholic Archdiocese of Saint Louis, including a bell given to the church by the governor of the territory of Louisiana during the early 19th century. Bishop Joseph Rosati, who ordered the construction of the church, is interred in a vault underneath the sanctuary.

All content from Kiddle encyclopedia articles (including the article images and facts) can be freely used under Attribution-ShareAlike license, unless stated otherwise. Cite this article:
Basilica of St. Louis, King of France Facts for Kids. Kiddle Encyclopedia.