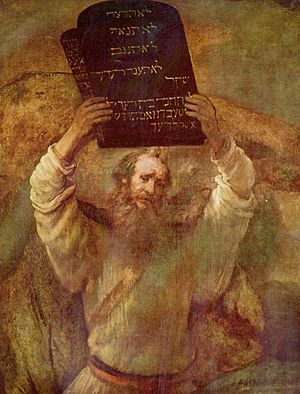 Moses with the Ten Commandments by Rembrandt in 1659.

The Biblical Mount Sinai is a mountain that was written about in the Old Testament. It was written by Moses that the Ten Commandments were given to him by God on Mount Sinai. The name Horeb is sometimes used to describe Mount Sinai. Tradition places it at Jebel Musa (Mount Moses) in the south of the Sinai Peninsula, but some see it as being further north at the Wadi Sudr.

All content from Kiddle encyclopedia articles (including the article images and facts) can be freely used under Attribution-ShareAlike license, unless stated otherwise. Cite this article:
Biblical Mount Sinai Facts for Kids. Kiddle Encyclopedia.