Jean-Léon Gérôme' (11 May 1824 – 10 January 1904) was a French painter and sculptor in the style now known as academicism. The range of his oeuvre included historical painting, Greek mythology, Orientalism, portraits, and other subjects, bringing the academic painting tradition to an artistic peak. He is considered one of the most important painters from this academic period. He was also a teacher with a long list of students. 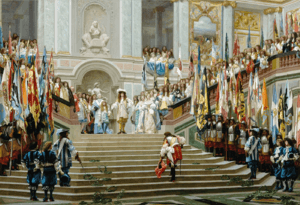 Gérôme was elected, a member of the Institut de France in 1865. Already a knight in the Légion d'honneur, he was promoted to an officer in 1867. In 1869, he was elected an honorary member of the British Royal Academy. The King of Prussia Wilhelm I awarded him the Grand Order of the Red Eagle, Third Class. His fame had become such that he was invited, along with the most eminent French artists, to the opening of the Suez Canal in 1869.

He was appointed as one of the three professors at the Ecole des Beaux-Arts. He started with sixteen students, most who had come over from his own studio. His influence became extensive and he was a regular guest of Empress Eugénie at the Imperial Court in Compiègne.

Jean-Léon Gérôme died on 10 January 1904. He was found in front of a portrait of Rembrandt and close to his own painting Truth Coming Out of Her Well. At his own request, he was given a simple burial service without flowers. But the Requiem Mass given in his memory was attended by a former president of the Republic, most prominent politicians, and many painters and writers. He was buried in the Montmartre Cemetery in front of the statue Sorrow that he had cast for his son Jean who had died in 1891.

All content from Kiddle encyclopedia articles (including the article images and facts) can be freely used under Attribution-ShareAlike license, unless stated otherwise. Cite this article:
Jean-Léon Gérôme Facts for Kids. Kiddle Encyclopedia.