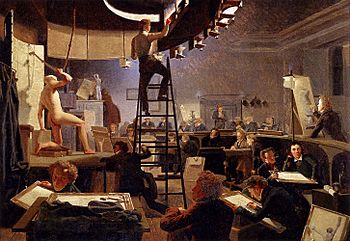 Life class at the Royal Danish Academy of Fine Arts in 1826 by Wilhelm Bendz.

Academic art was an artistic style that was popular from the 17th to the 19th century. Different art schools laid down rules on what a good painting or artwork shouls look like. Academic art was influenced by these rules, and was about applying them when creating a work of art. Academic art is a form of Realism in art. One of the main ideas that influenced academic art was that of Aristotle: A work of art should give a selective, but true copy of a part of reality. This idea was transformed into the concept of mimesis, or imitation. Together with thisidea, there were a number of subjects that were acceptable for painting or sculpture. Very often, the subjects came from mythology

The École nationale supérieure des Beaux-Arts in Paris had a lot of influence on the movement. At the time Neoclassicism and Romanticism were the main movements at the school.

With later art styles, especially that of impressionism, academic art losts its importance.

All content from Kiddle encyclopedia articles (including the article images and facts) can be freely used under Attribution-ShareAlike license, unless stated otherwise. Cite this article:
Academic art Facts for Kids. Kiddle Encyclopedia.