Sarah Bernhardt (23 October 1844 – 26 March 1923) was a French stage actress, and has often been called "the most famous actress in the history of the world". Bernhardt made her fame on the stages of Europe in the 1870s, and was soon working in Europe and the United States. She developed a reputation as a serious actress, getting the nickname "The Divine Sarah."

She was born in Paris as Marie Henriette Bernardt, the daughter of Julie Bernardt and a Dutch father. She added the letter "H" to her first and last name, and used the name of Edouard Bernardt, her mother's brother, as the name of her father. This was probably done to hide the fact that her father was unknown.

Bernhardt's career started in 1862, when she was a student at the Comédie-Française. She was not very successful there, and left to become a courtesan by 1865. She became famous in Europe in the 1870s, and was soon in demand all over Europe and in New York. She may have been the most famous actress of the 19th century. She coached many young women in the art of acting, including Liane de Pougy.

In 1905, while performing in Rio de Janeiro, Bernhardt hurt her right knee during the final scene when she jumped from a high wall. The leg never healed properly, showing signs of bruising. By 1915, gangrene had set in and her entire right leg was amputated, meaning she was in a wheelchair for several months. Nonetheless, she continued her career. She carried out a successful tour of America in 1915, and died on returning to France. On 26 March 1923, Bernhardt died of uremia following kidney failure. She is buried in Père Lachaise Cemetery in Paris.

Sarah Bernhardt has a star on the Hollywood Walk of Fame at 1751 Vine Street. 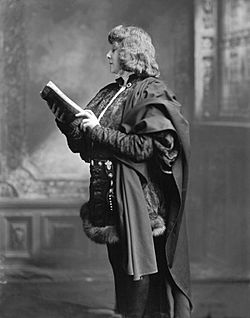 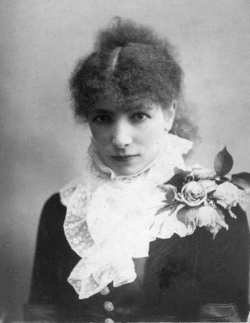 All content from Kiddle encyclopedia articles (including the article images and facts) can be freely used under Attribution-ShareAlike license, unless stated otherwise. Cite this article:
Sarah Bernhardt Facts for Kids. Kiddle Encyclopedia.